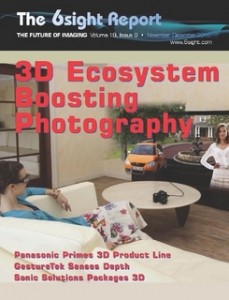 PHOTOGRAPHERS. If you want to better understand why there’s so much hype about 3D imaging, download the November/December, 2010 issue of The 6Sight Report. Most of the content of the 30-page issue is devoted to 3D imaging technology, and explains why it’s definitely not a passing fad. Reading the 6Sight Report will give you some valuable context as you start to see more and more product announcements related to 3D imaging.

Although sales of 3D TVs haven’t taken off as quickly as anticipated, one analyst quoted in the 6Sight Report predicts that, “It’s going to be a gradual development, and in 10 years almost everything will be in 3D. It won’t be a big special effect; it’s going to be how we’re used to seeing everything on television.”

6Sight analysts agree that eventually most photography and video will be in three dimensions, not two. Although we have become comfortable with flat images in print and onscreen, we view the world in 3D through two eyes, instead of one lens. As one expert put it, “All flat photography is just a poor attempt to emulate natural perception.”

Slowly but surely, image capture and display devices are being developed that will make viewing 3D images more natural and enjoyable to view. And 3D imaging on big TV screens will provide an immersive environment that everyone on the family can enjoy together.

Vincent John Vincent, who cofounded the GestureTek company that makes 3D camera-based motion control systems for electronic devices, notes that, “It’s not as if we’re going to get 3D to a certain level and then back off. It will eventually be commonplace to have 3D consumer devices for both photography and video…It’s worth learning about it now and adding one’s own artistic understanding to it.”

Darin People notes that some professional wedding and commercial photographers are already starting to see the advantages of being able to not only take still pictures but also 3D pictures for their clients.

As 3D photography starts to become ‘point-and-shoot’ simple, more photographers will think of new and interesting ways to use the camera. Darin People says Panasonic will take a close look at what consumers are saying and what highly creative individuals are doing with 3D technology and try to figure out: “What are the new things that people want to do with 3D that maybe we haven’t even thought of yet?”

Although sales of 3D TVs haven’t exactly set sales records, experts agree that one of the main impediments has been the lack of compelling content. But over the next few years, the technology and available content will improve and prices will come down.

A number of companies have already waiting to fill the content void. For example, the website SignOn San Diego recently profiled Legend3D, a company that specializes in converting film scenes from 2D to 3D. The company anticipates that it’s only a matter of time before entire libraries of Hollywood films will be converted from 2D to 3D. Legend3D founder Barry Sandrew is quoted as saying, “The technology semi-automates the process, but there has to be a creative person there watching over it and doing it.” Over the coming year, he expects to hire another 150 workers in San Diego and 300 more in India.

The professional wedding and portait photographers who are planning to attend the WPPI Show Feb. 21-23 in Las Vegas will be able to see 3D prints in the 3DPhotoUS booth. The company will be showcasing some of the personalized 3D wedding and portrait prints that they can now offer to their customers. The prints can be made from uploaded JPEG files; a 3D camera isn’t necessary.

According to the company’s website, you won’t need any glasses to see the 3D effects in the wall prints. Nor will the prints be covered by a grooved, lenticular lens that adds an uneven surface to the print. Instead, the prints have a mirror-like surface that uses backlighting to enhance the 3D effects. The company, which has a showroom in the Los Angeles area, will be using a newly developed process to make the prints in their factories in China and Taiwan.

Personally, I have seen this cycle play out before. When the first generations of digital cameras were introduced in 1990s, many skeptical experts scoffed that those early-model cameras could never possibly be good enough to replace pro-model film cameras. Yet, look how far digital photography has come since then. And, many journalists who attended Adobe press conference announcing the PDF format were very skeptical that Adobe’s innovation would ever become as widely adopted as Adobe envisioned.

Last fall, I attended a Canon Expo in New York, in which the company’s engineers and scientists demonstrated some of the mixed-reality and immersive 3D imaging technologies that are being developed.  As I wandered through these mind-blowing “Future of Imaging” exhibits, three thoughts kept crossing my mind:

2 thoughts on “Why Is There So Much Hype About 3D Imaging?”