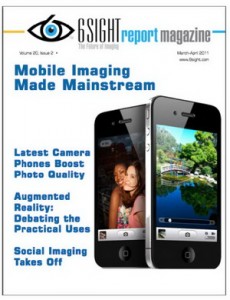 The March/April issue of the 6Sight Report focuses on the growing popularity of mobile imaging, and explains why smart phones provide the perfect combination of camera, display, processor, and connectivity technologies to bring augmented reality experiences to the masses.

The State of Mobile Imaging

The 6Sight Report leads off with Tony Henning’s excellent article on why camera phones are quickly replacing standalone digital cameras as the primary image-capture device used by consumers. He points out that camera phones have always enjoyed two distinct advantages: (1) You carry your phone with you everywhere you go; and (2) Your phone is always connected to family, friends, colleagues and the Internet.

When the first camera phones were introduced in 2000, they were abysmal picture-taking devices.  Yet, in just 10 years, more than 1 billion phones with cameras have been sold.

Yes, there have been rapid, across-the-board improvements in hardware and functionality. But people didn’t really start using the cameras in their smartphones until Apple introduced the iPhone with software that made the cameras easier and more fun to use. As Henning puts it, “Apple made it easy to find the camera function and take pictures, and made it delightful to view and share and interact with them…Suddenly, handset manufacturers were forced to rethink their convoluted, menu-driven interfaces and consider the user experience.”

He notes that since Apple introduced its App Store in 2008, more than 400,000 different apps have been made available, including more than 8,300 in the photography category.  Photography apps can extend the functionality of the camera, streamline uploads to social-networking sites, enable photo editing, let you send printed postcards or invitations from your phone, translate foreign languages, track your medical condition, show the caloric content of foods, read barcodes, and much more.

Augmented Reality on Your Camera Phone

When you see real-world information about tourist sights, movies, restaurants, and services superimposed over what you’re viewing in your camera, you’re experiencing “augmented reality”—images plus information.

The 6Sight Report features a transcript of the panel discussion on augmented reality that was held at the 2010 Future of Imaging Conference last November. Paul Worthington of the 6Sight Report conducted the discussion. Panelists included: Ivan Franco of Ydreams; Michelle Fallon of YOUReality3D; Greg Davis of Total Immersion; Noora Guldemond of Metaio; and Blair MacIntyre, director of the Augmented Environments Lab at the Georgia Institute of Technology

They noted that augmented reality has been used in industrial and commercial applications for several years, but the latest generations of camera phones have made it possible for everyone to start working with augmented reality.

“We still have to find that killer app,” emphasized Franco.

MacIntyre agreed, but believes it’s only a matter of time before someone comes up with a compelling application that will make the use of augmented reality take off. He notes that we couldn’t have imagined Facebook or Twitter of before they happened, and adds that “I don’t think we’ll know what AR is good for until the college student in the dorm figures out what people want, and creates the Facebook of mobile AR.”

Augmented Reality in Museums and Art

It’s always been fascinating to watch what happens when creative professionals start experimenting with new ways to use emerging forms of technology.

A recent NY Times article talked about how museums in New York, Los Angeles, and Europe are developing augmented reality apps that can help visitors better understand some of the exhibitions they are viewing. Some apps will encourage users to interact with the art in new ways.

An international artists’ collective known as Manifest.AR will be experimenting with emerging forms of augmented reality as “interventionist public art.” During the Boston Cyberarts Festival April 22 through May 8, they will be installing virtual objects and artworks in and around Boston’s Institute of Contemporary Art.  Manifest.AR has previously participated in augmented-reality interventions at the Museum of Modern Art, the Statue of Liberty, the Venice Biennial, the White House, and the Pentagon.

Another group at the Cyberarts Festival will enable smartphone users to detect virtual alien invaders around Greenway Park, the Boston Children’s Museum and Cyberarts Central at Atlantic Wharf.

1 thought on “Will You Create the Killer App for Augmented Reality?”