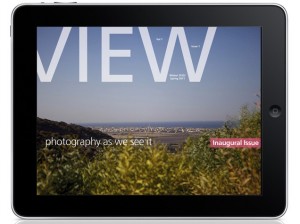 PHOTOGRAPHERS. Here’s one more good reason why it’s vital to show your very best work online: You might get discovered by the publishers of a new, independent art-photography eZine called VIEW. Curated by photographer Alon Koppel, View is not built around a theme. Instead, Koppel looks for an eclectic range of good photography from little-known photographers from around the world. Most of work featured in View was discovered online.

In addition to being a photographer, Koppel is a partner in the multimedia design studio FusionLab. The studio specializes in visual communications for mobile media and the web. Clients include Condé Nast, The New York Landmarks Conservancy, The Municipal Art Society of New York, Architectural Digest, The Authors Guild, and Thomson
Reuters.

FusionLab launched View to help demonstrate some of the visual possibilities of the iPad. Each issue of View takes full advantage of the iPad’s unique format and ability to display images with stunning clarity and interactivity. The View iPad app is available as a free download from Apple’s iTunes app store. 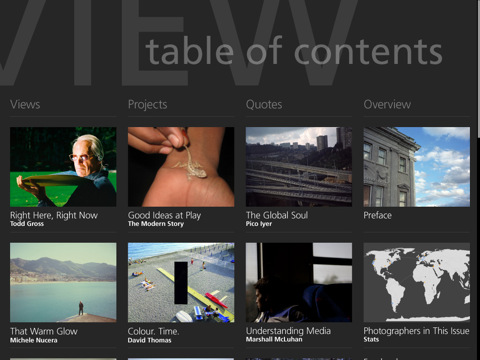 The first issue of View was launched in March; the second issue was recently released. View #2 includes: the bold New York City street photography of Todd Gross; Mark Powell’s vibrant Mexico photos; Australian artist David Thomas’ series of painting on photos; and Satoshi Sakurai’s powerful photos of Fukushima. There are also photos of
the wall dividing Israel and Palestine as seen (and decorated) from the Palestinian side; wonderful photographs taken through The Modern Story, a program that gives underserved children in India cameras to document their world; and SPANA’s pictures of the developing-world’s beasts-of-burden.