WRITERS. For a clearer view of how the journalism world is changing, visit Encyclo—the encyclopedia on the future of news. Produced by the Nieman Journalism Lab at Harvard University, Encyclo lists and describes the organizations having the biggest impact on how news is gathered, assembled, distributed, and consumed. 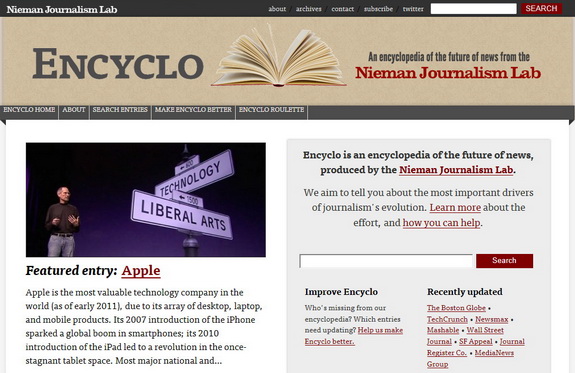 In addition to traditional news organizations such as the New York Times, The Atlantic, and CNN, Encyclo discusses Internet-enabled newcomers to the news business. These newcomers range from non-profit organizations that focus on high-end investigative work to “content farms” that have turned content into a commodity and given new meaning to the term “article writing.”

According to the Encyclo website, “We believe there’s something to be learned from both ProPublica and Gawker Media, from the Wall Street Journal and WikiLeaks, and from the Texas Tribune to the Huffington Post.”

Encyclo also includes entries on technology firms that are having a major impact on the news business, including Google, Apple, Twitter, Facebook, and Craiglist.

Each encyclopedia-style write-up in Encyclo summarizes what’s important about the organization from a future-of-news perspective. Updates to each entry incorporate the latest major announcements about how the organization’s business model or services are evolving.

The creators of Encyclo encourage readers to help keep the entries up-to-date. They have set up a page on the site through which you can tell them what entries they should add, update, improve, or fix.

Encyclo was made possible by a grant through the John S. and James L. Knight Foundation.