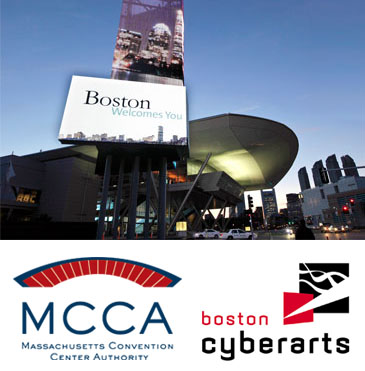 Today, Boston Cyberarts and the Massachusetts Convention Center Authority are kicking off “Art on the Marquee,” an ongoing project to commission public media art for display on the new 80-foot-tall multi-screen LED marquee outside the Boston Convention & Exhibition Center in South Boston.

The largest urban screen in New England, this unique digital canvas will be one of the first of its kind in the U.S. to integrate art alongside commercial and informational content as part of the MCCA’s longstanding neighborhood art program.

Six Massachusetts artists will be featured in the first round of projects:

“Art on the Marquee” offers artists more than 3,000 square feet of digital display on seven screens, providing full-motion video and a viewership of more than 100,000 pedestrians and motorists. The marquee is visible for a half a mile in many directions and is seen by traffic on Summer, D, and Congress streets, as well as from the surrounding hotels, office buildings and the Seaport World Trade Center.

“By broadcasting this amazing media art as part of our marquee content, we hope to provide a model for future signage and urban screens in both Boston and North America – pushing the marquee content in new and unexplored directions that will please our guests and events while helping establish this program as one of the most creative and iconic in the country,” said James E. Rooney, executive director of the MCCA.

“Boston Cyberarts is thrilled to be working with the MCCA to bring digital art to the streets of Boston’s Innovation District,” said Cyberarts Director George Fifield. “As urban screens become ubiquitous worldwide, the ‘Art on the Marquee’ initiative at the BCEC expands the use of dynamic digital displays for public media art in one of Boston’s most rapidly developing public spaces.”

Subsequent calls for proposals will be issued during in the spring. Boston Cyberarts is also collaborating with digital media departments at Emerson College, Mass College of Art, and Rhode Island School of Design to create student-made work for the marquee.

Future plans will look to include other colleges, universities and local high schools in the initiative. “Art on the Marquee” is partially funded by a 2012 Adams Grant from the Massachusetts Cultural Council (MCC), whose seed funding helped launch the first Boston Cyberarts Festival in 1999. “The MCC is pleased to continue its support for Boston Cyberarts as it reaches into new creative channels,” said MCC Executive Director Anita Walker. “This year’s project offers great opportunities for the growing number of our artists working in new media, while reenergizing Boston’s visual landscape.”

Art on the Marquee