PHOTOGRAPHERS. Have you heard people talking about Aurasma yet? You will soon—particularly when ad agency, editorial, and marketing clients start asking you to shoot videos along with your stills. 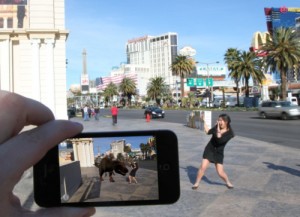 Aurasma is free “augmented reality” platform that can be built into apps for higher powered Android devices, newer-generation iPhones, and iPad2 devices.  Aurasma-equipped apps can then blend still images with rich, interactive content such as videos and animations.

For example, when you point your mobile device at a print ad in a magazine, bus shelter, or retail store, the ad will transform itself into an interactive video. Aurasma can be used to create “auras” for printed images, product packaging, instructional manuals, clothing, and physical places.

One professional photographer who has incorporated Aurasma into an app is Sam Robinson who provides photography and filmmaking services for commercial and editorial projects.

He says that when he first saw Aurasma demonstrated, he was completely bowled over: “This technology is a completely new medium that dissolves all of the boundaries between photography and film.”

The Aurasma “visual-browser” platform was developed by the British software company Autonomy, which is now an HP company.  Since being launched in 2011, Aurasma has been downloaded more than 2 million times. Aurasma is being used by publishers, advertisers, and visual communications professionals in fields such as retail, sports, automotive, and consumer electronics.

The Hawaii Visitors and Convention Bureau (HVCB) used Aurasma technology as part of a month-long print campaign in a Chicago commuter-train station. John Monahan, president and CEO of the HVCB, said, “Bringing one-dimensional images to life puts commuters as close to being in Hawaii as possible in a compelling way,”

How Photographers Can Use Aurasma 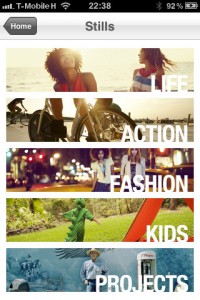 Sam Robinson is using Aurasma to add a new dimension to the stills he includes in his postcard mailings to prospective clients.  Clients who want to learn more about Robinson’s work can download the free Sam Robinson Photography App, point it to a still image on the postcard, and instantly see videos that are linked to the still photo.

Sometimes clients will see behind-the-scenes video of a particular shoot or examples of the video footage Robinson shot along with the still photos planned for use in a print ad campaign.

Tamas Szabo, of the app-development company Megatomi, said incorporating Aurasma into Robinson’s app was intuitive and user-friendly: “With just two lines of code, we were able to integrate Aurasma into the existing app. From start to finish, it took just a few hours and the result is incredible.”

“Building Aurasma into my app seemed to make total sense,” says Robinson.  “The demand for multi-channel campaigns is growing, and Aurasma’s Developer Studio lets me bring together my stills and film work for the first time. I’m completely hooked.”

Martina King, managing director of Aurasma, believes the creative possibilities are just beginning to be explored: “We’re working with some of the world’s largest corporations, but we’re also working with internationally renowned creatives such as Sam Robinson. Artists, photographers, filmmakers, animators, designers—the creative industries instinctively understand Aurasma’s potential and are using our free technology to push the boundaries and change the way people see and interact with the world.”