The second round of works is now being featured on “Art on the Marquee,” an ongoing project to commission public media art for display on the 80-foot-tall multi-screen LED marquee outside the Boston Convention & Exhibition Center in South Boston. The project is a collaboration between Boston Cyberarts and the Massachusetts Convention Center Authority.

“This latest round of new art on the marquee is a testament to the strength of our new public art program and the unique talent in New England,” said James E. Rooney, executive director of the Massachusetts Convention Center Authority. “We truly believe that over time, as the growth of similar public video marquees grow, our collaboration with Boston Cyberarts will serve as a showcase for the rest of the world.”

“We couldn’t be happier with the second round of works. The artists have tackled the challenge of making works for a video sculpture, and are taking advantage of the different orientations and resolutions of the screens,” said Boston Cyberarts Director George Fifield. “And, we’re thrilled that ‘Art on the Marquee’ has captured the imagination of the city and that people are really seeing these pieces. They don’t have to go into a gallery – the work is right there in front of them – 80-feet tall!”

About Art on the Marquee

The largest urban screen in New England, “Art on the Marquee” offers artists more than 3,000 square feet of digital display on seven screens. The screens provide full-motion video and are seen by more than 100,000 pedestrians and motorists. The marquee is visible for a half a mile in many directions and is seen by traffic on Summer, D, and Congress streets, as well as from the surrounding hotels, office buildings and the Seaport World Trade Center.

A panel of Boston Cyberarts and MCCA staff selected the works that are featured. Calls for proposals will be issued throughout the year.

Boston Cyberarts is collaborating with digital media departments at Emerson College, Mass College of Art, and Rhode Island School of Design to create student-made work for the marquee. In the future, other colleges, universities and local high schools will be included in the initiative.

Francois De Costerd and Todd Antonellis: “Axiom #3: Territory”
This piece presents built and un-built environments in a series of tableaux that layer intensely color-saturated satellite and aerial photography. From an impossibly high point of view, the imagery moves, spins, zooms in and out and dissolves into the next tableau. “Territory” is part of Cycles and Ideals, an ongoing collaborative project that is a visual study of Western civilization dealing with the allure and implications of the consumer economy. www.cyclesandideals.com

Christopher Field and Sarah West: “I Am Waiting”
A visual representation of the rhythm and pattern of urban circulation on the subway and train lines of the Boston area, “I Am Waiting” uses multiple screens to highlight intersections of movement. This work features footage (both abstract and representational) of moving trains with shifting perspectives, colors and textures.  www.ckfield.com 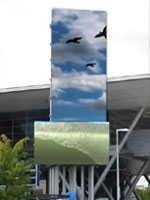 This piece reintroduces elements of nature into the urban environment. Video of Boston’s blue sky and white clouds with a formation of circling birds on the tall vertical portion of the marquee is juxtaposed with video of the Pacific Ocean forming a series of large, crashing waves along the bottom horizontal screens. The created seascape shows its artificiality through a shift in scale and perspective as waves heave past their confines, clouds are cut off, and giant birds emerge from nowhere and then disappear. www.georgiefriedman.com 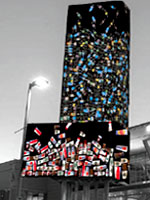 This computer-generated animation represents how many bottles of water and coffee and soda cups we consume and waste every day. Bottles and cups start falling as if it they were raindrops. The way these life-size cups and bottles fall and bounce makes viewers feel as if they are literally under a shower of bottles and cups. After the screen has filled up, the viewer has the sensation of being covered in a huge mountain of bottles and cups. www.linamariagiraldo.com

Christopher GraefeLinda Dehart and Meg Brooker: “Emergence”
The Colors in Motion creative team provides architects, designers, planners and developers with transformational content sourced from traditional art forms. “Emergence” is the work of three members of Color in Motion: a painter, dancer, and digital media artist. Inspired by new large-scale vertical and horizontal digital media surfaces that break the standard aspect ratios of traditional video, Linda DeHart painted a series of abstract watercolors specifically for public displays. Digitally scanned at high resolution and artfully sequenced, the paintings provide an idea “canvas” for dancer Meg Brooker’s graceful gestures. Digital media artist and compositor Christopher Graefe wove these art forms together so that a dazzling panoply of rich colors and textures slowly transform from one composition to another. The effect is an ever-changing and intricate study of light and form that celebrates the grace and beauty of the human form in nature. www.colorsinmotion.com

Ben Houge: “Model Lightbox”
This digital collage shows photographs of backlit fashion advertisements that Houge took before moving from Shanghai to Boston. Tassels and fringes, pouty lips, and vapid eyes are extracted from their brand logos and marketing taglines, suggesting that in our intensely message-saturated media environment  images should be free to be, not sell.  www.benhouge.com

Michael Lewy – “City Of Work”
This piece is part of a long-term project that uses computer graphics and animation to create a dystopian society about the nature of work. The Marquee project is an animation of an office worker riding an endless elevator juxtaposed against video of the same worker in a solitary office. www.mlewy.com

Dennis Miller: “IV”
This animated abstract video uses bright, morphing colors in a geometric design. Thick converging lines change size and angle while the animation pans outward (up and down simultaneously) from an origin precisely at the upper tip of the bottom screen. The hard angles of the work align with the unusual curves of the screens themselves. www.dennismiller.neu.edu/

Matthew Shanley: “Building Boston”
This artwork reflects Shanley’s fascination that much of Boston is built upon man-made land. Thanks to human investment and labor, what was once water is now a thriving community. Playing with the different orientations of the component screens, the work contrasts video panning across the brick and rows of windows of local Fort Point buildings with video of water with layered animations plotting out the ghosts of future streets. www.littlesecretsrecords.com 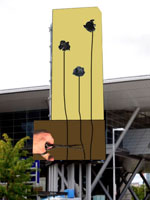 Black crumpled balls of paper hanging by strings are inverted, so they appear to be struggling to fly, held in the grip of a reversed gravity, tethered to the ground by threads. The action is in slow motion so it appears more significant on the monumental screens of the Marquee. A hand holding scissors reaches in and cuts the threads one at a time. More balls “drop” i.e. jump up, held by string, and the process repeats itself, ad infinitum. www.jeffu.tv

Art on the Marquee

About the Massachusetts Convention Center Authority