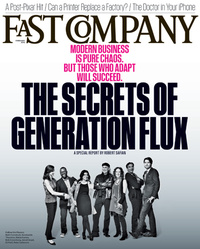 Two feature stories that appeared in the February 2012 issue of Fast Company magazine are must-reads for everyone who feels uncertain about the forward momentum of their careers. The articles explain why modern business is pure chaos, and suggest how those who adapt can succeed.

If you have ever wondered if some job choices might lead you down a dead-end alley for your career, these articles will help put things in perspective. For one thing, you’ll see that you aren’t alone in feeling unsettled.

Both articles (which have been posted online) show how individuals of all ages are coping with today’s state of uncertainty in businesses and career paths.

In the article titled “The Secrets of Generation Flux,” Fast Company editor Robert Safian says members of Generation Flux can be any age and work in any industry.  He defines Generation Flux as “a mindset that embraces instability, that tolerates (and even enjoys) recalibrating careers, business models, and assumptions.”

Acceptance of instability is critical because the pace of disruptive change has accelerated, making it exponentially harder to predict what will happen next in our economy and culture.

This uncertainty has also made it harder for businesses and individuals to determine: “Which competitive advantages have staying power? What skills matter most?” If the fundamentals of any given business might change overnight, how can individuals and businesses weigh their risks and opportunities?

Safian predicts that not everyone will join Generation Flux and emphasizes that most educational, corporate, and political institutions are not built for flux: “Few traditional career tactics train us for an era where the most important ability is the ability to acquire new skills.”

He warns that becoming nostalgic is not an option: “Trying to replicate what worked yesterday only leaves you vulnerable.”

Because the 40-year long career path is dead, he says individuals today must be prepared to work at multiple gigs and constantly adapt to new work situations. This means we will all be under constant pressure to learn new things. Safian acknowledges that this new reality can be daunting and exhausting, but notes, “It can also be exhilarating.”

“The chaos ahead sounds pretty grim,” writes Safain. “But its corollary is profound. This is the moment for an explosion of opportunity, there for the taking by those prepared to embrace the change.”

In the article entitled “The Four-Year Career,” Anya Kamenetz examines why the average job tenure has declined sharply since the 1970s. She highlights how individuals are navigating careers full of variation, quick turns, and deeper meaning by seeking out what’s most useful and innovative. If this type of career path makes your resume look a bit unorthodox, it’s OK. Just understand how to explain it.

“Shorter job tenure is associated with a new era of insecurity, volatility, and risk,”
writes Kamenetz. She sees it as part of the same employment picture marked by an increase in part-time, freelance, and contract work, along with mass layoffs and buyouts.

Executing a career turnaround can be difficult for people over 40, Kamenetz says, particularly if “your chosen field is shrinking like a glacier in August.”  Although older workers have grown accustomed to adapting to new technologies (e.g. the Internet and mobile communications), they still must accept that their years of experience may be regarded as irrelevant.

Kamenetz highlights some tactics people are using to stay relevant in today’s environment. For example, some are repackaging their existing skills while building new ones.  Other individuals have learned to think like freelancers and develop several sources of income. A “T-shaped” individual is one who develops transdisciplinary interests, with depth in one subject and breadth in others (e.g. a photographer who understands graphic design, videography, and social media).

The article quotes Marina Gorbis at the Institute of the Future, who believes that “It’s much harder than it used to be to predict what jobs are going to be around in 10 years.” She believes that “everything that can be routinized, codified, and dissected will eventually be done by machines.”  Thus, adapting to this future will mean applying greater levels of social and emotional intelligence—the things that computers aren’t good at.

She believes that hiring managers won’t discriminate against job hoppers, as long as you explain why you like to move around and how you’ve grown in the process. Being able to tell an appealing story about the twists and turns in your career can be essential to your self-marketing.

Fast Company: This is Generation Flux: Meet the Pioneers of the New (and Chaotic) Frontiers of Business