If futurists such as Wired magazine editor Chris Anderson are correct, many of us are going to have personal 3D printers in our homes some day. So, would you rather buy a 3D printer that looks like a microwave oven?  Or would you prefer a device that’s more interesting to watch?

DeltaMaker LLC is banking on the fact that many people would opt for a more elegantly designed 3D printer –one that makes the act of creation as interesting as the finished 3D products they can generate. They came up with a prototype design to “shift 3D printing from industrial spaces and back rooms to living rooms, waiting rooms, and classrooms.” 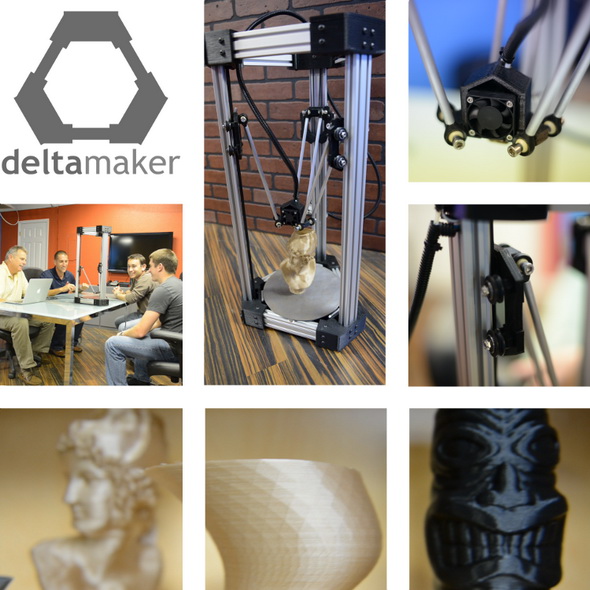 The four engineers behind the design believe that “While many artists and designers produce finished pieces of art from 3D printers, we view the creation process as art as well. We envision an artist who not only displays his finished works during an exhibition, but has a DeltaMaker creating a new piece during the show.”

Apparently many other people can see the potential in DeltaMaker’s innovative design as well.

DeltaMaker launched a Kickstarter campaign on January 24 with a funding goal of $107,000. So far (as of February 12), they have raised more than $115,000 from 173 backers. This puts them among the small percentage of Kickstarter projects that has attracted more than $100,000. And the campaign isn’t scheduled to close until Feburary 28, 2013.

So, if you want to help the DeltaMaker team move their innovative 3D printer into production, there is still time to contribute to the Kickstarter campaign. You can pledge as little as $1 or as much as you like. DeltaMaker is offering rewards ranging from T-shirts and 3D prints to actual DeltaMaker 3D printer.

The DeltaMaker project team chose the crowdfunding route because they want to cultivate a community of passionate supporters who can help with word-of-mouth marketing. Printers are expected to begin shipping in low quantities in June with production scaling up in the following months.

The DeltaMaker startup team, Bob Houston, Robin Lopez, Zack Monninger, and Craig Rettew, have been developing the DeltaMaker prototype for the past year. All four founders have undergraduate degrees in engineering (mechanical, electrical, aerospace, and software engineering) and have worked in industry for companies such as IBM, Lockheed Martin, and FLIR Systems. Together, they have decades of engineering and product development experience, and understand what it takes to design and produce complex systems.

Now that the project has successfully reached its funding goal, the DeltaMaker team has hired the Charlotte-based digital marketing firm, Command Partners to accelerate the growth of the start-up company.

“Yes, there are other 3D printers out there, but this one is a no brainer,” says Amish Shah, Managing Partner and CEO of Command Partners. “With a clean aesthetic feel, they’ve tapped a new market and positioned it as a conversation piece for display.”

SME To Display Art Created with 3D Printing and Imaging