Artists are known for thinking different. So, as more artists collaborate with technology developers, it was only a matter of time before an artist used an MRI (magnetic resonance image) to show the world how she thinks. 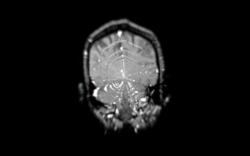 Artist Paula Crown’s installation “Inside My Head: A Contemporary Self-Portrait” features a manipulated MRI of the activity in her brain. The installation is on view at the Aspen Institute in Aspen, Colorado until September 2, 2013.

In the installation, two large convex screens have been mounted on customized metal frames and face each other in the center of the space. Viewers who stand directly between the screens observe the passage of seemingly abstract pattern –a pulsating accumulation of shapes and forms. These images, documented via MRI, reveal the workings of the artist’s own brain. 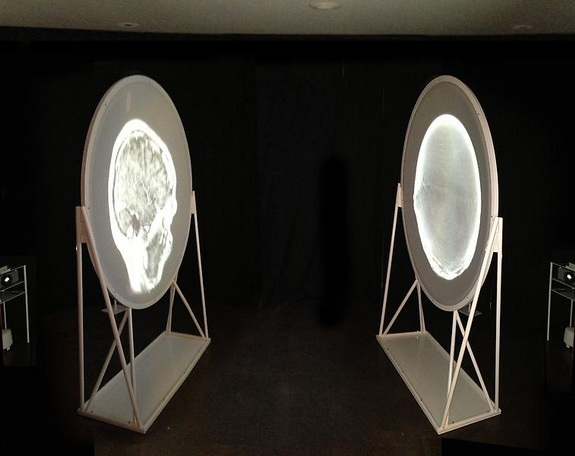 Crown has manipulated the images in a way that references painterly techniques from the Renaissance to the present, including the use of multiple points of perspective, sfumato, three-dimensional imaging, and cross-disciplinary collaboration.

The animation has been translated into image sonifications (also generated from the MRI scans). Todd Reynolds and Ben Rubin composed a musical score to accompany the installation and create sounds that fill the room.

The exhibition was organized by Chris Byrne, with the installation designed by The Office for Creative Research.The Office for Creative Research is a multidisciplinary research group that is exploring new modes of engagement with data through unique practices that borrow from both the arts and sciences. The Factum Arte team of artists and technicians provided video and technical support.

Paula Crown is a cross-disciplinary artist, who seamlessly employs tools ranging from pencils to 3D printers. Crown serves on the Presidential Committee on Arts and Humanities and the board of The Museum of Modern Art. She received her MFA in Painting and Drawing from the School of the Art Institute of Chicago in 2012. She is a principal at Henry Crown and Company in Chicago.

The Aspen Institute is an educational and policy studies organization based in Washington, DC.

Inside My Head: Paula Crown