ARTISTS. Two news releases Christie’s posted online this year show how rapidly the online marketplace for art is expanding, even at the upper echelons.

In 2006, Christie’s was the first art business to launch online participation in live auctions. Over the past five years particularly, they have seen dramatic increases in the volume of lots purchased via its Christie’s LIVE platform. Christie’s launched their e-commerce platform in 2011 and has held 70 online art auctions.

In a January 22 press release, Christie’s reported that 2013 was a record-breaking year for art sales. Christie’s art sales topped $7.1 billion in 2013, a 16% increase from 2012.They attributed these gains partly to the expanding buyer base made possible by greater online accessibility.

While the $20.8 million that came from on-line only sales seems miniscule compared to the $5.9 million from live auctions and $1.19 billion in private sales, Christie’s regards their online sales as a key driver of  attracting new buyers and increasing global accessibility to authenticated art and luxury goods.

“With 16% sales growth and 30% new buyers coming in 2013, Christie’s has succeeded again by focusing on the art and connecting it to the ever-increasing audience of enthusiasts and collectors,” said Christie’s CEO Steven P. Murphy. “We continue to see a surge in interest across categories and across the globe, fueled in large part by the online platform enabling greater connectivity between buyers, sellers and the objects of their pursuit. Our continuing goal is to provide more to our clients and to convene new clients to enjoy art, be it through auctions, exhibitions. or online.”

Plans to Expand Their Digital Engagement

In a May 6 press release, Christie’s announced plans to invest about $20 million in improving their online services. Technological and digital advancements will include infrastructure improvements, an enhanced client-service experience, and creative content and media endeavors.

Statistics included in the release show why Christie’s is eager to expand their digital presence.

In 2013, Christies.com experienced a 19 percent increase in visitors. The site attracted 20.6 million unique visitors from more than 100 countries. The number of mobile viewers was up 42 percent in 2013.

“The global audience for art is increasing, museum attendance has increased again, and the art market is continuing to grow. This is in part driven by digital accessibility of art and imagery”, said Murphy in a panel discussion at Atlantic Ideas Live in New York. “Not long ago, our New York sales catalog would be viewed by a few thousand catalog subscribers four weeks before the sale. Now more than a million visitors view the works online.”

“This online accessibility combined with ever increasing visitor numbers to our public exhibitions has shifted the dynamic,” observed Murphy.  “This has also fundamentally impacted the value of the original object itself, as the experience of standing in front of the pictur 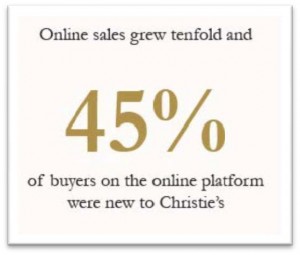 e and owning it has become even more powerful.”

Founded in 1766, Christie’s is the world’s leading art business. Christie’s offers about 450 auctions annually in over 80 categories, including fine and decorative arts, jewelry, photographs, collectibles, and wine. Prices range from $200 to over $100 million.