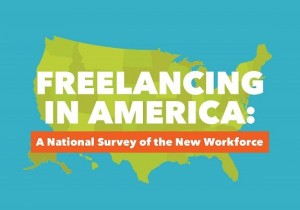 More than one in three workers — 53 million Americans — are now freelancing, according to the most comprehensive survey of the U.S. independent workforce in nearly a decade.

The study, “Freelancing in America: A National Survey of the New Workforce,” was conducted by the independent research firm Edelman Berland and commissioned by Freelancers Union in partnership with Elance-oDesk.

Freelancing in America: A National Survey of the New Workforce from Elance-oDesk

“Freelancing is the new normal — and this survey shows that America’s new workforce is big, crucial, and here to stay,” said Sara Horowitz, Founder and Executive Director of Freelancers Union.

“The 53 million Americans who are freelancing already contribute more than $700 billion to our national economy and help U.S. businesses compete and find the skills that they need. This is just the start: The connected era we live in is liberating our workforce. The barriers to being a freelance professional — finding work, collaborating with clients and getting paid on time — are going away,” said Fabio Rosati, CEO of Elance-oDesk.

The economic impact of the 53 million Americans who are freelancing is significant. Collectively, they contribute more than $715 billion in freelance earnings to the national economy. And that impact is expected to grow in the coming years. Findings show that:

Freelancers are seeing more demand for their work. Twice as many freelancers have seen an increase in demand in the past year as have seen a decrease (32% increase, versus 15% decrease).

As demand increases, so does their reputation. Almost two out of three (65%) freelancers said freelancing as a career path is more respected today than it was three years ago.

The potential for earnings is helping to drive the growth of freelancing.  80% of non-freelancers surveyed said they would be willing to do additional work outside of their primary job if it was available and enabled them to make more money.

The study identified five segments of freelancers, covering the diverse range of people who are freelancing today:

Independent Contractors (40% of the independent workforce / 21.1 million professionals). These “traditional” freelancers don’t have an employer and instead do freelance, temporary or supplemental work on a project-to-project basis.

Moonlighters (27% / 14.3 million). This professionals have a primary, traditional job but also moonlight doing freelance work. For example, a corporate-employed web developer may also do projects for non-profits in the evening.

Diversified Workers (18% / 9.3 million). This group includes people with multiple sources of income from a mix of traditional employers and freelance work. For example, someone who works at a dentist’s office 20 hours a week may generate the rest of his income driving for Uber and doing freelance writing.

Temporary Workers (10% / 5.5 million). These freelancers work for a single employer or client on a temporary job or contract project. For example, a business strategy consultant may be contracted to work for a startup client on project that lasts several months. .

Mikki Morrissette of Minneapolis spent more than a decade in corporate publishing in New York City before switching over to become a freelance writer and communications specialist 15 years ago.

“I am so much happier in this new stage of my career,” Morrissette said. “As a single mom with two kids, and an itch for travel, I love the flexibility. I get to choose the projects I work on and mostly work with other eclectic entrepreneurs like me. I love being free to pursue my interests where they take me.”

About the “Freelancing in America” Study

For the study, more than 5,050 U.S. working adults over the age of 18 were surveyed online between July 19, 2014 – July 31, 2014. Of those, 1,720 were freelancers and 3,332 were non-freelancers. Results are weighted to ensure demographic representation in line with the United States Bureau of Labor Statistics 2013 Labor Force Statistics from the Current Population Survey. The study has an overall margin of error of ±1.38% at the 95% level of confidence.

The Freelancers Union serves the needs of the growing sector of independent workers. More than one in three working Americans is an independent worker. They are lawyers, nannies, graphic designers, writers, artists, photographers, illustrators, marketing specialists, and more.

Elance-oDesk is one of the world’s largest online workplaces. More than 2.5 million businesses and 8 million freelancers tap into www.Elance.com and www.oDesk.com to work together via the Internet.

Freelancing in America: A National Survey of the New Workforce