A solo exhibition of Bruce Beasely sculptures is on display at the Autodesk Gallery in San Francisco until February 7, 2014. What makes the sculptures noteworthy is that they were all output on 3D printers.

Beasley is an internationally known abstract sculptor whose signature bronze sculptures are collected by major museums, including the Pompidou in France, and the Guggenheim and Museum of Modern Art in New York.

While Beasley was among the first to legitimize 3D modeling as a way to draw, sketch, and imagine, the “Coriolis” series displayed at the Autodesk Gallery is the first time Beasley used 3D printing to actually “sculpt” his final artwork. After using Autodesk Alias, 3dsMax, and Inventor software to model the works, he used a state-of-the-art 3D printer to build up detailed ribbons of liquid plastic in ascending tiers to bring the designs to life. 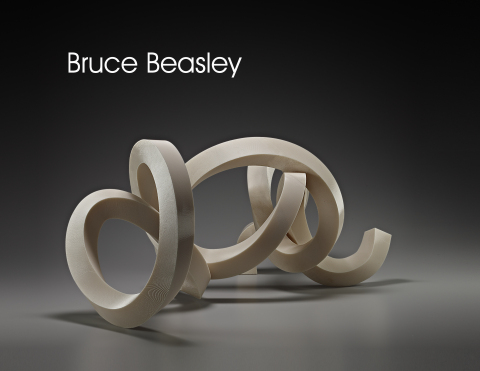 “I’ve always held the belief that fine art is the vision of the artist and not defined by the tool of production,” said Bruce Beasley. “These Coriolis works utilize Autodesk technology that best allows me to investigate and communicate what has fascinated me for over sixty years – the aesthetic and emotional potential of complex shapes in space. Computer modeling and 3D printing give me the ability to make sculptures I could not execute in any other way. The creative impulse remains the same whatever tools an artist uses, but it is liberating and exciting to explore a new vocabulary of shapes—part mechanical, part organic— made possible through innovations in technology.”

In 2008, the Autodesk-sponsored Digital Stone Exhibition showcased Beasley and three other sculptors who use 3D software as part of their artistic process. Autodesk chose to partner with Beasley in this solo exhibition to demonstrate their mutual commitment to exploring the rich interactive boundaries between creativity and technology.

“Bruce has always forged a new technological path to further his art and was one of the earliest artists to adopt our design software into his work,” said Carl Bass, Autodesk president and CEO. “His latest Coriolis exhibition further solidifies him as one of the leading masters of revolutionizing fine art sculptural media.”

Bruce Beasley and his Coriolis exhibition will be featured at Autodesk Design Night December 5 at the Autodesk Gallery in San Francisco.

The Autodesk Gallery at One Market in San Francisco celebrates the design process that takes a great idea and turns it into a reality. With more than 20 different exhibits regularly on display, the gallery illustrates the role technology plays in great design and engineering. The Autodesk Gallery is open to the public every Wednesday and Friday from 10 a.m. to 5 p.m., with a guided tour at 12:30 p.m. every Wednesday.

The University of Houston College of Natural Sciences and Mathematics and the School of Art will host 3DCAMP Houston 2012 on Saturday, September 29, 2012. Expert speakers will discuss how 3D technologies are impacting fields ranging from architecture, art, and education to engineering, medicine, and science.  At 3DCAMP, you can see how 3D laser, modeling, and illustration technologies are being used in sculpture, architectural visualization, game development, building information modeling, and the design and fabrication of Hollywood props and themed environments.

The all-day symposium is open to the public. The $15 symposium registration fee includes access to presentations by more than 15 speakers and a juried 3D art exhibition. Vendors will also be on hand to demonstrate the possibilities and uses of some of the most interesting and mind-blowing 3D technology.

“The rapid evolution in visualization technology is playing a critical role in advancing many important areas, from medical and surgical techniques to new methods of energy realization and information transmission,” said Mark A. Smith, dean of the University of Houston’s College of Natural Sciences and Mathematics. “With the university playing a critical role nationwide in these developments, it is satisfying as well as natural to help bring this understanding to our community through 3DCAMP 2012.”

Rex Koontz, director of the University’s School of Art adds that, “Technology, art and design are converging into a significant force on our cultural and economic landscape. The School of Art welcomes the opportunity to work with the cast of 3DCAMP to further the goal of creating synergies between art and technology.”

The conference is being chaired by David Morris, the technology consultant who started 3DCAMP in 2009. While attending school at Texas A&M, he helped create a popular open-source 3D modeling application that has been downloaded over 100,000 times by users around the world. Morris says, “I created 3DCAMP to help people understand what a wide variety of applications there are for 3D technologies—especially in an economy as rich and diverse as Houston’s. I would like to expand the audience for 3DCAMP this year, to be even bigger and better than before.”

Call for Entries in Art Exhibit

3DCAMP Houston 2012 will also host “The Third Dimension,” a juried exhibition of artwork of all mediums that use 3D technology in the creative process. The opening reception will be held from 6 to 9 pm on Friday, September, 28 and the exhibit will remain open to the public during the symposium on Saturday, September 29.

The exhibition will be curated by artist and gallery owner Lori Betz, who is also president and founder of Houston Art and Culture, a local non-profit organization established to enrich the community with arts mentoring and scholarships. The jurors will be members of 3DCAMP’s organizing committee.

All artists are welcome to apply. All art styles and mediums are encouraged, including digital and film, as long you adhere to the theme, “The Third Dimension” and have used a 3D technology during some point in your creative process. The deadline for submitting entries is September 3.

Betz says, “The exhibit will feature artwork that uses some of the techniques and technologies that the speakers will be talking about. It’s like nothing you have ever seen before.”