Here’s a billboard-sized example of a project that blends hand-painted art with digital communication technologies.

Clear Channel Outdoor, one of the world’s largest outdoor advertising companies, celebrated its sponsorship of the Cannes Lions International Festival of Creativity in June by completing the world’s first hand-painted micrography billboard made entirely of tweets.  Micrography is a technique is which text is used to form an image that is most visible when seen from a distance.

The hand-painted billboard is composed of hundreds of tweets answering questions such as:

The tweets were generated by the company’s #canvas for creativity social media debate. It was the third most used hashtag at this year’s Cannes Lions festival.

Set in the grounds of Le Grand Hotel in Cannes, the mural featured the 60th Anniversary Cannes logo, celebrating the creative potential of the global advertising industry, and Cannes’ 60 years of recognizing and inspiring exceptional creativity.

To continue the discussion online, the mural was converted into the world’s first gigapixel image searchable by tweet. Contributors can search for their tweet by keyword or Twitter handle, to see in high-resolution detail exactly where in the mural it appears.

“Cannes Lions is an important global celebration of the brands and businesses that push the boundaries of creativity,” said Paul Evans director, marketing and planning, Clear Channel International. “Our hand-painted Twitter mural symbolize the powerful audience effect that can result when physical and digital experiences collide in meaningful ways.”

Social media visualizations of the #canvas Twitter content were streamed on CCO’s website, digital screens at the festival, and a high-resolution projection onto a separate 18 x 5 meter canvas located on the roof of the Le Grand Hotel, Cannes. The projection canvas was built specifically for the festival and sat at the highest spot on the Croisette – a spot never before used for advertising or media at Cannes Lions. This content played for a total of 18 hours every day to over 11,000 delegates from 92 countries.

Artists Patrick McGregor and Tait Roelofs, as part of CURB’s team. Patrick McGregor is an artist trained in hand-painted billboard ads and fine arts. Over the past two decades, he has delivered extraordinary outdoor ads for companies ranging from Nike to Marc Jacobs as well as galleries.Tait Roelofs (aka T8) is a Los Angeles based artist working in various media, mainly painting, sculpture, and video. T8 has exhibited in numerous art fairs including Art LA, Scope NY, Pulse Miami, and at the ISLIP Art Museum in Long Island. He has had numerous solo and group shows in Los Angeles and New York. He is currently represented by De Soto Gallery in Los Angeles.

Gigapixel Image of Tweets on the Billboard 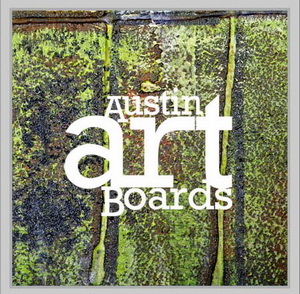 Works from the ten Austin Art Boards winners will beautify area roadways for the next one to two years on billboards donated by Reagan.

To enter, each artist submitted a work that was 6 x 24-inches wide, and mounted with a 2-inch border. The final prints to be installed on the billboard will be 14 x 48 feet wide, with the art occupying an area of 12 x 48 feet. Entrants were encouraged to be creative and keep in mind that they were creating art, and not advertising. 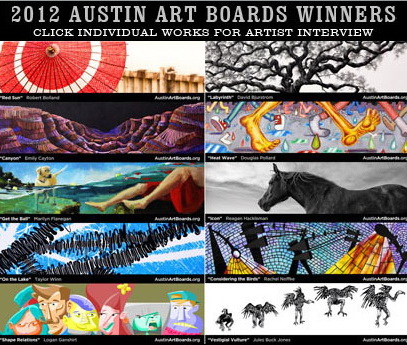 “It’s a privilege to be able to contribute to our city’s unique creative culture by celebrating the work of local artists on our billboards,” said Billy Reagan, president of Reagan Outdoor Advertising. “This year’s competition attracted work from our city’s incredibly diverse and talented field of artists.” Winners in the 2012 Austin Art Boards competition include:

An Austin Art Boards exhibit featuring all winning entries and honorable mentions will be open for public viewing at the Bass Concert Hall (floors L4 and L5) from August 22 through October 8. Reagan Outdoor Advertising also plans to host a reception in mid-September to further celebrate the 2012 winners.

Video interviews with the winning artists have been posted in the gallery on the Austin Art Boards website.