Interviews of 5,000 adults in the United States, United Kingdom, Germany, France and Japan provide new insights into the role of creativity in business, education and society overall.  The survey was conducted from March 30 to April 9, 2012. The results are published in Adobe’s State of Create global benchmark study.

According to the study, 8 in 10 people agree that unlocking creativity is critical to economic growth. And nearly two-thirds of respondents feel creativity is valuable to society. Yet only 1 in 4 people believe they are living up to their own creative potential.

The survey found that people spend less time creating at work than they do outside of work.

Although workers are increasingly expected to think creatively on the job, 75% of respondents said they are under growing pressure to be productive rather than creative. Across all of the countries surveyed, people said they spend only 25% of their time at work creating. About 69% of respondents believe that risk aversion in business stifles creativity.

More than half of those surveyed feel that creativity is being stifled by their education systems, and many believe creativity is taken for granted (52% globally, 70% in the United States).

“One of the myths of creativity is that very few people are really creative,” said Sir Ken Robinson, Ph.D., a leader in the development of education, creativity and innovation. “The truth is that everyone has great capacities but not everyone develops them. Too often our educational systems don’t enable students to develop their natural creative powers. Instead, they promote uniformity and standardization. The result is that we’re draining people of their creative possibilities and, as this study reveals, producing a workforce that’s conditioned to prioritize conformity over creativity.”

Here are a few other noteworthy findings:

The study also sheds light on different cultural attitudes toward creativity. Japan ranked highest in the global tally as the most creative country while, conversely, Japanese citizens largely do not see themselves as creative.

The United States ranked globally as the second most creative nation among the countries surveyed, except in the eyes of Americans, who see themselves as the most creative. Yet Americans also expressed the greatest sense of urgency and concern that they are not living up to their creative potential (United States at 82%, vs. the lowest level of concern in Germany at 64%).

Generational and gender differences are marginal, reinforcing the idea that everyone has the potential to create. Women ranked only slightly higher than men when asked if they self-identified as creative and whether they were tapping their own creative potential.

Four in 10 people believe that they do not have the tools or access to tools to create. Creative tools are perceived as the biggest driver to increase creativity (65% globally, 76% in the United States).

About the Adobe State of Create Study

The study was produced by the research firm StrategyOne and conducted as an online survey among a total of 5,000 adults (18 years or older) in the United States, United Kingdom, Germany, France and Japan. Interviewing took place from March 30 to April 9. The data set for each country is nationally representative of the population of that country. 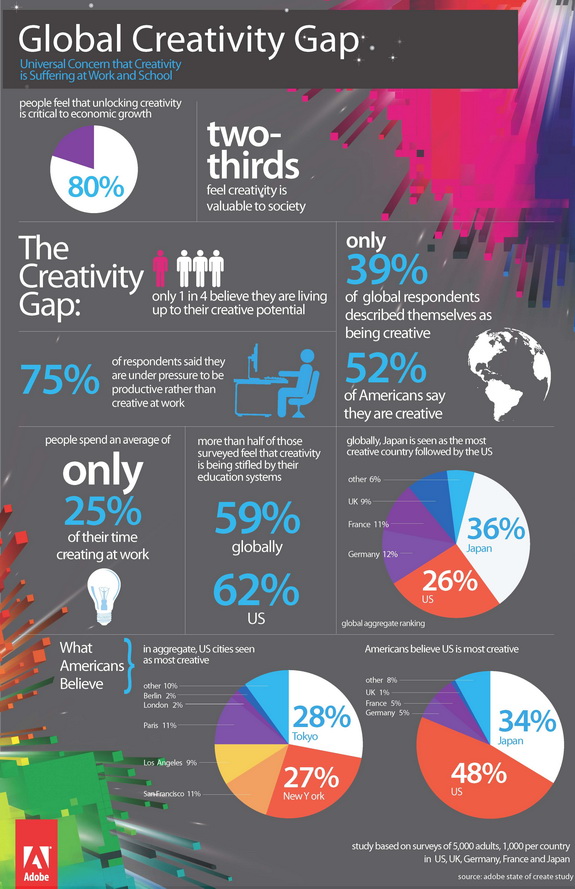