After attending a recent Display Technologies Conference sponsored by the market-research firm DisplaySearch, technology PR expert Andy Marken sent me an interesting paper entitled, “It’s Not About the Personal Device, It’s About the Personal Content.” In the white paper, he summarized some of the predictions made at the conference and observes that continuing advances in screen technologies may ultimately change how we use computers.

And, he wonders if seeing these advanced screen technologies in movies and TV shows such as “Minority Report,” “NCIS:LA” and “Hawaii Five-O” will help speed mainstream adoption. Here’s a quck rundown of predictions Marken came up with, based upon presentations from the analysts and developers who attended the display technology conference.

Computing power won’t disappear, but will continue to evolve.
Marken writes that, “The IBM PC that recently marked its 30th anniversary looks Stone Age next to our tablet system and smartphone. In another 30 years, even these marvels will join the ranks of memorabilia at the Computer Museum.”

He believes today’s hugely popular tablets and smartphones are just waypoints along the road: “In 30 years, you’ll wonder why you even carried them with you to get your information, news, data, and entertainment.”

The computer as we know it will fade away.
“Why do you need a personal device when cloud computing, cloud storage and virtual computing are here?” asks Marken. The smart network is rapidly rising and an Internet layer protocol called IPv6 has been rolled out globally.

“In its simplest terms, IPv6 is an Internet layer protocol for providing end-to-end datagram transmission across multiple IP networks.” writes Marken. What this means is that: “You’ll have your own phone number (ID) and the network will be smart enough to know where you are so your communications—written, video, audio—can be routed to the nearest enabled device – your car, TV, shopping cart display, fast food digital sign, watch, clock radio, you name it.”

If you start to wonder if technology might be moving too fast, Marken cites statistics that suggest the rate of change will only speed up: “Intel estimates that over the next four years, there will be 2 to 3 billion Internet users (approaching half of the world population). And, there will be more than 15 billion (Internet) connected devices.”

He predicts that as chip sizes continue to shrink and become increasingly complex, we’ll see a healthy mixture of general-purpose and specialty processors that use less and less power to perform more and more tasks: “It probably shouldn’t be too hard for the chip folks to put the- CPU, GPU, video, encryption, baseband and other operations in something so small it will work in anything, everything.” Increasingly, the devices are all connected over the wireless mesh networks to larger and larger “systems” that manage content traffic and store personal information as well as company and general information.

Information will be personalized.
Today, people want to control their own information gathering. Interactive display signage kiosks such as the one shown below are an important step in meeting the consumer’s wants/needs. The kiosks allow you to ask questions tailored to your wants and needs and then recommend which products might right for you. These types of kiosks will eliminate the need for the traditional sales clerk. If the kiosks can help you make good buying decisions, the theory is that you will be a more satisfied customer. 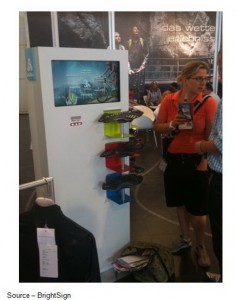 “Semi-intelligent signage is already being used around the globe to enable consumers to view and learn more about products and determine which ones they want to purchase,” Marken points out. Some of the more advanced systems even have a virtual mode that shows you wearing or using the product.

Displays will help you make decisions on the go.
A subway-system display island that enables you to use your smartphone to make an instant purchase and have the products delivered to your home is a logical first step. “Consumers will go to a 3D interactive digital sign, make a selection, ‘try it on,’ make the purchase and be on their way. It sure beats shopping with the wife.” writes Marken. 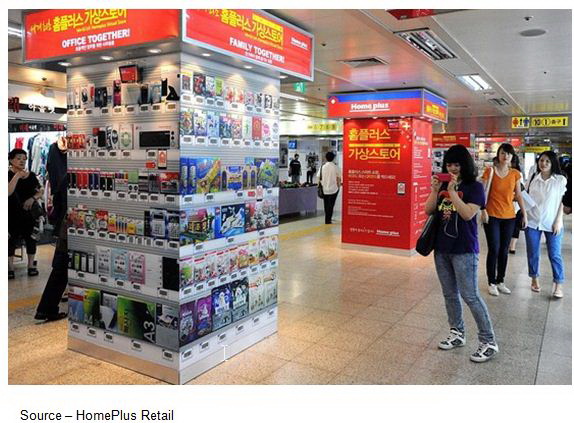 The next steps will be to view the product on digital signage anywhere in 3D, virtually try it on or work with it, and purchase it using your personal ID. Your personal ID could be a scan of the iris of your eyes, a thumbpint, or automatic facial-recognition.

Screens are changing…rapidly.
“A lot of folks say the industry is trying too hard and people just don’t want 3D TV and a bunch of dumb glasses.” say Marken. But he predicts that “In five years, you’ll wonder why people said 3D TV would never take off. You won’t remember being entertained in 2D. Until then, sit back, live with it, enjoy it.” 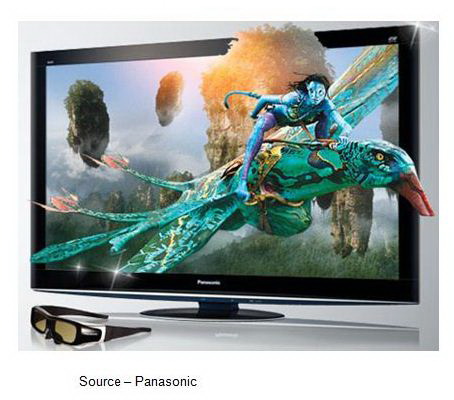 Although quality 3D content is woefully lacking, and few people like wearing the glasses, these issues are likely to get resolved sooner than we might think. Based on what he learned at the trade show, Marken predicts that as interactive 3D screen technology continues to improve, the demand will grow, and eventually, “They’ll not only be in your family room but everywhere you go.”

Touch screens will also become more ubiquitous. Marken notes that on almost every new system you interact with, you expect to simply tap the screen a few times and get the information you want: “Watch a little kid come up to your notebook and watch them instinctively try to enlarge or shrink pictures with their fingers. Only your TV is a passive screen, but that too will change.”

At the DisplaySearch-sponsored conference, analysts predicted that LCD displays will grow at a compound annual rate of 39 percent through 2014 and there will be screen technologies to keep us entertained everywhere, all the time. Soon, you won’t even think twice about walking past large interactive signs. 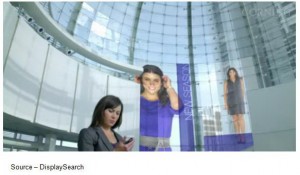 “We’re already comfortable digital signage, and just expect it to present information and images in a clean, crisp form,” says Marken. “The use of static printed signs in stores, restaurants, entertainment venues, educational and worship facilities, and businesses are rapidly being replaced with solutions that bring the information to life.”

What sparked all this enthusiasm about new screen technologies and the changing face of computing? Check out the video “A Day Made of Glass” made possible by Corning.

Because a glass company produced it, this video highlights the many different types of glass that will make advances in screen technology possible.

“The thing we noticed in the video is there is computer power everywhere but none of the ‘computers’ we’re used to interacting with today,” says Marken. “And it all looks and feels so natural, so logical. Your information is available to you wherever you are, when you want it…heck, it will probably be telling you before you ask. We’re just not sure who will be storing it all, and managing it all for us.”

Personally, I regard Andy Marken as a credible source. Like me, he’s watched how rapidly technology has evolved just over the past 30 years. We have both witnessed multiple incidents in which skeptics have initially scoffed at certain technologies only to see those same technologies gain widespread acceptance in five years or less.

The most recent example, of course, is the Apple iPad. Remember how it was initially dismissed as “just a larger version of the Apple iPod touch.” That’s one reason I agree with Andy’s assertion that 3D screens will gain widespread acceptance sooner than today’s skeptics might think.

VIDEO: A Day Made of Glass Made Possible by Corning