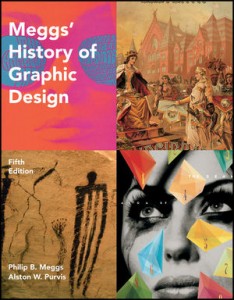 DESIGNERS. John Wiley & Sons has introduced the Fifth Edition of the best-selling textbook “Meggs’ History of Graphic Design” by Philip S. Meggs and Alston Purvis. The Fifth Edition not only contains new information on multimedia, interactive design, and private presses, but the book itself will be available in e-book formats for the Kindle, the Nook, and the iPad.

The interactive iPad edition from Inkling will bring the history of graphic design to life, with embedded video and audio and “guided tours” that let you learn the story behind each image. To tour an image, simply tap through sequential pop-tips to learn the details and info that make each image important. Interactive timelines include pop-tips with image samples. Other features will include slideshows of multiple images, flashcards, and quizzes that let you test your knowledge of the title of the work, the designer, and year of creation.

As with other e-books, you will be able to search the contents, highlight with ease, and save and share notes through social learning networks.

The first edition of “A History of Graphic Design” was published in 1983. It was heralded for it balanced insights and the thoroughness of its content. The book shows how graphic design has been a vital component of each culture and period in human history, with sections on topics such as the invention of writing and alphabets, the origins of printing and typography, and postmodern design.

The 624-page hardcover version lists for $85.00. The iPad version is expected to be released in January will sell for about 40% less.

Inkling is a San Francisco-based company that is seeking to redefine the textbook and the way people learn. The engineers and designers at Inkling work closely with content and education experts to take advantage of the fact that multi-touch devices such as the iPad allow publishers to move beyond the constraints of the printed book.

About Inkling’s iPad version of Meggs’ History of Graphic Design