JWT has released their list of “100 Things to Watch in 2013.” It’s a fascinating read, especially if you are a solopreneur seeking to create or market new products or services.

While things such as 3D Bioprinting seem a bit far out, the JWT report starts with a recap on the accuracy of previous “things-to-watch” forecasts. For example, the 2012 list included anywhere/any way shopping, smart clothing, and crowdsourced, online learning.

Here are 10 items in the report that might be of special interest to creative pros:

Patchwork Earnings
Sites such as Etsy and Kickstarter are enabling individuals to turn side projects into profitable ventures.  Non-traditional career paths will become the norm and Millennials (and others) will cobble together income from a variety of sources.

Serialized Digital Fiction
JWT predicts that serialized fiction (which was popular in the 19th century) will experience a digital revival through sites such as Byliner and Amazon’s “Kindle Serials” program.

Prime Time for the Second Screen
JWT believes that this may be the year the Internet gains true legitimacy for its original programming.

Flexible Screens
Screens that bend and curve could begin entering the market this year, initially on phones and wearable devices. They are forecast to be common within five years.

Imperfection
Consumers increasingly value the authenticity of imperfect-looking products (such as homegrown vegetables). Marketers may begin showing more real people instead of models.

Ambushed by Amazon
JWT predicts that Amazon.com might ultimately prove to be an extremely disruptive force.  They point out that while Amazon.com started out as a threat to booksellers, “it’s fast becoming Enemy No. 1 to retailers of all stripes now that it sells everything from high-end apparel to win and has shrunk its delivery times.”

Live-Streaming Life
People will use super-compact video cameras to live-stream their memories in real time.

Media that Gets to Know You
Media (video, audio, e-book content) will be tailored to individual consumers based on real-time data about each consumer.

Mobile-Optimized Goes Mainstream
Now that a growing proportion of smartphone users are accessing the Web primarily through their mobile devices, most marketers will strive to have their websites optimized for mobile by the end of 2013.

Super Stress Era
If 2012 left you feeling stressed out due to too much information and/or concerns about too little online privacy, JWT says you aren’t alone. In the “10 Trends for 2013” report they issued earlier this year, their experts contend that we’re entering “The Super Stress Era” and predicted that governments, employers, and brands will ramp up efforts to prevent and reduce stress.

In this “100 Things to Watch” report, JWT predicts that more people will seek the JOMO (Joy of Missing Out) by slowing down, savoring the moment, and focusing on what’s really important.

You will also be able to use stress-monitoring apps, buy products that earn the “Quiet Mark” seal of approval, and enjoy “privacy etiquette” rules to avoid over-sharing on social media. JWT also expects more people to retreat to nature to avoid the stresses of city living. We might also see more natural, organic elements in décor or more nature-themed entertainment.

JWT is a marketing communications firm that employs nearly 10,000 marketing professionals in more than 200 offices in over 90 countries. The JWT Intelligence group helps clients make sense of the chaos in a world of hyper-abundant information and constant innovation.

JWT, a global leader in marketing-communications, has released its list of 100 Things to Watch in 2012. The list was compiled by the agency’s JWT Intelligence group, which strives to make sense of the chaos of hyper-abundant information and constant innovation. 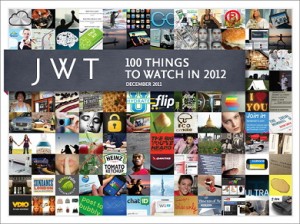 “Many of the items on our list reflect broader economic, environmental, technological and social developments we’ve been tracking, while others have potential to ladder up to bigger trends,” says Ann Mack, director of trendspotting at JWT.

Some of the 100 things on the 2011 list included new forms of books, entrepreneurial journalism, long-form content, and 3D printing.

Technology continues to have a prominent presence on JWT’s Things to Watch for 2012. Here are a few of the tech-related items making the list.

Access everywhere
Consumers will be accessing music, books, and video on a multitude of Web-connected devices wherever they are.

App overload
JWT predicts that the app-fyin of everything is just beginning: “The novelty of apps will wear off as consumers become paralyzed by too many choices.”

Crowdsourced learning
Knowledge seekers will look beyond the traditional student-teacher structure. Learning is becoming more democratic as people connect with teachers, hobbyists, and experts looking to share their interests and impart their knowledge.

Digital-into-physical postcards
Vacationers and others will use Sincerely’s Postagram app and Postcard on the Run to turn snapshots into snail-mailed postcards. (The “objectifying of objects” in an increasingly screen-filled world is one of the 10 bigger trends that JWT sees for the year ahead.)

LCD art
Limited-edition digital works will be accessible on mobile devices, PCs, and connected TVs. And in 2012, Samsung will produce high-res screens for displaying artwork.

Lytro
The Lytro camera will enable hobbyists to take “living pictures,” that can be refocused by the photographer and viewers—after the image is recorded.

Screened dining and shopping
Interactive screens in restaurants will replace menus and help entertain diners. Interactive touch screens in and outside of stores will allow customers to learn more about specific products, explore the inventory in greater depth, or browse the catalog after hours.

Videograms
Just as Instagram has transformed the way people show off their smartphone photos, new apps will enable users to add cinematic filters and music to their footage and share it over their networks.

Voice-based microblogging
Users of services such as Bubbly will be able to send text carrying sound files from people they follow.

Zink
Zink (“Zero Ink”) printers use a special thermal paper that doesn’t require ink or toner. Through partnerships with Dell and Polaroid, Zink markets a device that prints photos directly from a camera, anywhere.

The JWT list also includes noteworthy events on the calendar, people to keep an eye on, and things to watch in marketing, retailing, travel, food and sustainability.

You can read the full list of 100 Things to Watch, in the Slideshare presentation below.

JWT: 100 Things to Watch in 2012
View more presentations from JWTIntelligence