ARTISTS. DESIGNERS. Have you heard about the Streaming Museum? I hadn’t, until I received a news release from Brazilian architect and urban planner Emanuel Dimas de Melo Pimenta. The news release describes his vision of a new approach to designing Earth-orbiting structures, such as hotels and observatories that would accommodate larger numbers of space tourists. His ideas are depicted in the “Kairos” exhibition which opened at the Streaming Museum earlier this month.

About the Streaming Museum

Launched January 29, 2008, Streaming Museum is a hybrid museum that presents multimedia exhibitions in cyberspace and public space on seven continents and live programming at partnering cultural centers. The exhibitions are generated in collaboration with international cultural, educational, and public centers and artists, curators and visionary creators.

Streaming Museum is produced in New York, and broadcast to sites such as the city’s Big Screen Plaza. The museum’s exhibitions have been seen on big, outdoor screens in cities such as Milan, Italy; Seoul, South Korea; Melbourne, Australia; Bucharest, Romania; Port Elizabeth, South Africa; and in multiple cities in England. Exhibitions have also been streamed to South Korea, Norway, Greece, and Argentina’s Jubany Scientific Base in Antarctica.

One goal of the museum is to emphasize the role of the arts and technology in global society. Art of all cultures is presented side-by-side symbolizing society’s global interconnectedness and the valuable contributions that all cultures provide.

The inaugural exhibition of the Streaming Museum honored pioneering video artist Nam June Paik and his 1970s-era prediction of an electronic superhighway as a free medium for imagination and the exchange of cultures. This first exhibition was viewed at one public-screen location on each of the seven continents at precisely the same time. Since then, Streaming Museum exhibitions have been viewed at over 45 locations worldwide.

According to Streaming Museum’s founder and creative director Nina Colosi, the idea for creating an ongoing international distribution network for art and culture originated in 2004 when she was working with media artist, curator, and professor Zhang Ga on his global public artwork: “People’s Portrait.” Zhang Ga installed picture-taking kiosks next to large screens in major international cities and connected them to a central server via the Internet. People could snap their pictures and view them on the adjacent screen, along with portraits of people from the other cities.

Colosi describes the Streaming Museum’s exhibitions as “a mash-up/sampling/remix of fine art and pop culture that make up a portrait of the contemporary world.”

“We keep a file of work by artists who submit to us, with special consideration given to artists recommended by colleagues.” said Colosi.

Exhibitions can circulate for an indefinite period, and artworks can be exhibited across multiple platforms—online, in public spaces, and at partnering cultural and commercial centers.

“For example,” says Colosi. “Over the course of three years, Mark Amerika’s ‘Immobilite’ remixes and John Simon’s ‘HD Traffic’ and other artworks have been viewed throughout the global network and also presented in a live performance at Juilliard at Lincoln Center and exhibited at The Project Room for New Media at Chelsea Art Museum.

Colosi reports that artists whose work has been featured in the Streaming Museum have gained the attention of other curators and have been invited to participate in other projects. She considers one of the best benefits of exhibiting art through the Streaming Museum is “enriching a global demographic that may not have the opportunity to see art.”

The Project Room for New Media and Performing Arts

About the Kairos Project

Kairos represents a new approach to architecture that imagines a time when architects are asked to design buildings that don’t have to consider Earth’s gravity. As architect Emanuel Pimenta points out, “Until now, the entire history of architecture is based on the force of gravity.” But there may come a time when human expansion on Earth will no longer be possible. Thus, Pimenta says Kairos is “also a questioning about a new civilizational leap.”

“Until now, we have had no example of true architecture in space,” he explains. “Buildings related to satellites or space stations have been focused on tubular systems—a heritage from missile design.” The type or orbiting structure that Pimenta has envisioned is totally tensioned, with flexible, antiballistic fabrics and internal movable walls. 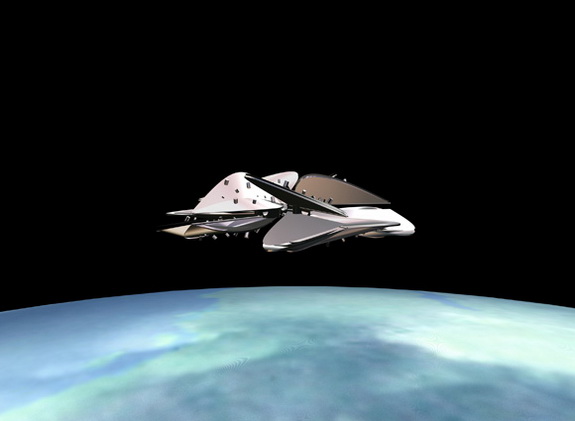 “We could call it a water building, because all walls are filled with water,” he points out. “It is completely deprogrammable, which means the original program, the functions of each internal space, can be easily and quickly changed at low cost.”

Pimenta views his architectural design as conceptual artwork. But the building design also takes into account technological challenges such as energy, water, exposure to space junk, and how the absence of Earth’s gravity will affect the spatial orientation of building occupants. To help others understand his vision, Pimenta has produced a series of drawings, digital images, a movie, and book.

After being launched at New York’s Streaming Museum, Kairos will continue on a year-long tour through the Streaming Museum’s global network of screens in public spaces. In October, the exhibition will also be shown at the Robotarium contemporary art and technology center in Lisbon, Portugal. The book, “Kairos: A Bird Orbiting Planet Earth” will debut on Amazon.com in November.