Jonathan Belisle, a Montreal teacher, script writer and web entrepreneur, has a storytelling system that combines old and new, traditional mythology and modern technology, and fantasy and reality.

Wuxia the Fox is a transmedia project that comes as an illustrated book paired with an iPad app.

“The app reacts to what it hears and sees,” explains Belisle. “As you read the story, the app adds the music and sound effects, based on where you are in the story and the tone of your voice. It’s the future of children’s books.”

The iPad app triggers new scenes of content using image recognition, and transforms into a musical instrument when interacting with small wooden blocks provided with the book.

It’s a revolutionary way to tell stories – for young and old. The messages in this kids’ book deal with the climate changes, earth and dreams. “This can be a tool for young people to increase their awareness of the technological and ecological changes currently underway,” said Belisle. “In addition to weaving a great tale, it can inspire people to be more environmentally responsible.”

The story in this augmented book revolves around Oremia, an 8-year-old girl who has vivid recurring dreams of great whales. Convinced she is actually a hologram, she meets Wuxia, a young fox with telepathic powers. Wuxia agrees to join Oremia to search for a legendary humpback whale named Nioma.

The combination of highly sophisticated electronics and lush illustrations has placed a significant price tag on this groundbreaking transmedia project. Belisle needs about $64,000 for book graphics, audiovisual content for the iPad app, development of the sound and symbol recognition algorithm, and copy editing. From now until May 2, 2014, he is running a Kickstarter campaign to raise funds for the project.

He plans to make the system available in French and English.

Depending on their donation levels, contributors can receive PDF versions of the book, soft and hardcover editions of the book in various sizes and wooden amulets.

“Our goal is to reinvent storytelling,” Belisle said. “It will inspire adults and children to connect with nature, developing new ways to share bedtime stories and explore their dreams.”

Here’s a new application of augmented reality. Tagwhat, a media company based in Boulder, Colorado, has a “Great Stories at Places” app that lets users of iPhones (3GS/4) and Android-using smartphones learn some of the stories behind places they visit.

For example, on the steps of Lincoln Memorial in Washington, DC, you can watch Dr. Martin Luther King’s “I Have a Dream Speech.” Or, while touring San Francisco, you can see historic photos that show how different sites were devastated by the San Francisco Earthquake.

Tagwhat’s team of new media journalists and filmmakers worked with publishing partners such as the Associated Press (AP), the National Trust for Historic Preservation, and the Virginia Beach Public Library System to create and curate thousands rich-media stories that can “augment” your understanding and enjoyment of some of the places you visit.

Organized like TV channels, the stories pop up on top of real-life locations and change based on where you are looking. If a story is too good not to share, you can send a personalized, digital postcard to friends via Facebook, Twitter or email. 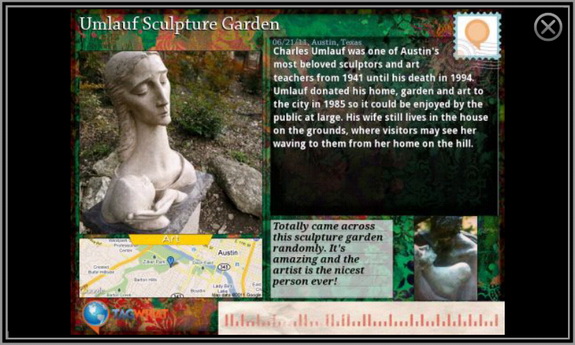 In the “Movies” channel, you can watch a clip of the parade from “Ferris Bueller’s Day Off” while walking down the same Chicago street. Or you can read about Woody Allen movie settings while touring New York.

Visitors to the LA Coliseum can tap into the “Sports” channel for a look back at the 1984 Summer Olympics with videos of gold medalists Mary Lou Retton and Carl Lewis.

In the “Music” channel you can hear Janis Joplin sing outside the Austin club where she got her start and see images of her preparing to perform.

A “Visit” feature lets you take a virtual trip to Tagwhat’s featured cities: New York; San Francisco; Los Angeles; Washington, DC; Chicago; Boulder, Colorado; Portland, Oregon; Austin, Texas; and Virginia Beach, Virginia. You can look around and interact with multimedia stories as if you were standing in that city!

Tagwhat is already seeded with thousands of stories, with new stories being added every day.