CapturedGlobal.com is a new online gallery that sells fine photography from renowned international photographers working across all genres.

The gallery was started by Peter Johnson, who has been collecting art for 35 years. Instead of the multiple-size, multiple-edition, multiple-price model used by some online fine-art photography galleries, Captured Global respects the creative goals of each photographer by printing each image only at the size the photographer requests.

As a photographer who aspires to the level of talent of the artists he represents, Johnson understands that envisioning the size of a final print is actually part of a photographer’s creative process. Just like any other artist, a photographer starts with an idea in their mind’s eye of how a certain picture should be presented.

Photographers can choose to have their works reproduced in (1) an open edition; (2) a limited edition of 2 to 10 prints; or (3) an edition of one. Johnson believes this “Open-Ten-One” model gives photographers more control over their work in the marketplace, provides a platform from which photographers can build a fan base, and more closely aligns the collecting of photography with the rest of contemporary art.

“For many artists, it’s difficult to break into the gallery scene. For every one photographer picked up by a gallery, there are hundreds of others producing extraordinary, collectible pieces,” says Johnson. “So we present a very intriguing option to the typically higher-priced, limited editions that galleries establish in an effort to create and control demand.”

An open edition means that there won’t be a predetermined limit on how many images will be published. Rather, the images will only be available for a limited period of time. Open editions offered at reasonable prices can help photographers build a fan base of collectors-a critical mass of people who love the work, says Johnson.

He disagrees with those who question the merits of open editions. As a collector of fine photography himself, he says he never once thought: “Oh, I love that piece because there are only five of them in the world.”

“When you think about it, it shouldn’t matter how many prints are in circulation, because you should be buying work because you love it and will enjoy it every day,” Johnson explains. “While limited editions were created as a means to establish urgency and ‘future value,’ the strategy only works if the edition sells out and returns as a resale on the secondary market.” On the web, you can find limited editions that haven’t yet sold out even after 10, 20, or 30 years.

“Famous photographers such as Ansel Adams, Henri Cartier-Bresson, and Julius Shulman offered images as open editions, many of which hold tremendous monetary value today,” says Johnson. “At Captured Global, the images, the artists, and their stories are our centerpiece, and we deliver great value for nearly anyone’s pocketbook.”

“Our open/ten/one strategy helps our artists establish ‘real value’ for their work,” says Johnson. Once open editions have helped a photographer build a good, strong following, “We’ll work them on offering a limited-edition image (no more than 10) at a higher price. Then, as their reputation grows and their work becomes more sought after, we may offer an edition of one, creating real value and demand for a singular, exceptional image.”

Participation by Invitation Only

Johnson digs deep to find intelligent and culturally relevant work worthy of private and public collections. Each of the 18 photographers whose work is currently shown on CapturedGlobal.com has been invited to participate. These selected artists have been asked to invite others whose work they admire.

“This unique curatorial process ensures highly reputable work and lineage of talent,” explains Johnson. “Collectors will find the work of young, emerging photographers side by side with established masters whose work is found in private and public collections around the world, including the San Francisco Museum of Modern Art, The Getty Museum, the Scottish Museum, and the National Gallery in Prague.”

“At Captured Global, we’re all about getting as many images as possible into the hands of as many collectors as possible,” says Johnson. “It’s a win-win for both artists and collectors.” 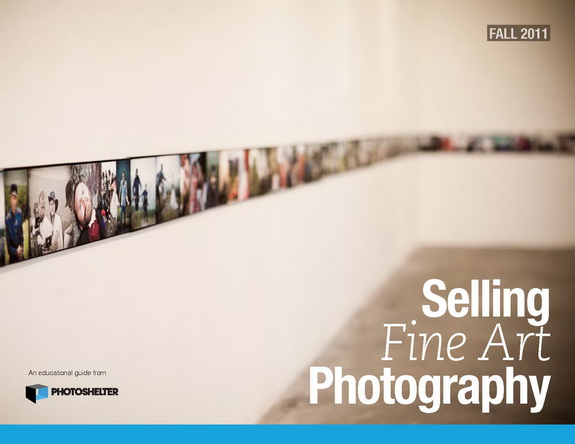 As you read through the guide, you’ll quickly see that there is no “one-size-fits-all” approach to success–partly because people have different interpretations of what a “fine-art photograph” is. The experts quoted in this guide offer a variety of opinions on what works and what doesn’t in selling photography as fine art and suggest a range of different tactics for getting noticed by online and offline galleries.

For example, Jeffrey Teuton, of the Jen Bekman Gallery in New York City, works closely with the 20×200 online gallery that markets limited-edition prints from a wide range of photographers. He urges fine-art photographers to “Be smart when choosing an online gallery to collaborate with. Many galleries like 20×200 have an exclusivity policy that prevents you from showing your same pieces in other venues. This means that the gallery you pick should have a strong marketing reach that can exposure you to a large network of potential customers.”

He notes that online galleries are receptive to emerging artists: “20×200 is not surprised when an undiscovered photographer comes on board and their work takes off—that’s why they make a point to search for fresh faces.”

The e-book also discusses how to use in-person events and social media to your marketing advantage, and different ways to maximize your website to generate business. This guide provides an in-depth look at how several photographers found their way into the fine art world and determined what can sell and how to price and market their work.

“Fine art is really defined by those who are purchasing,” observes photographer Ken Kaminesky. “You could have one piece that is very close to your heart that the person next to you has no reaction to whatsoever.” He also says that, “If you’re going to have an online presence to sell your fine art, you need to put time and effort into making yourself look good. That may mean hiring a website designer.”

Amanda Bowker, who has worked in some of the nation’s top museums and galleries, urges photographers to stay positive, create work even if it’s not being shown, and be persistent in try to get your art in front of collectors, galleery owners and curators: “Make it clear that you are a hard-working artist who is in it for more than the money. Curators and gallery owners will appreciate your dedication and commitment.”

PhotoShelter CEO Allen Murabayashi describes “Selling Fine Art Photography” as “a very helpful resource for photographers getting started in the fine art business, as well as those experienced pros who want ideas to fine-tune their marketing and sales. We’ve highlighted photographers, curators and other experts who have made smart decisions about ways to build an audience and market their fine art photography.”

Selling Fine Art Photography is part of PhotoShelter’s growing library of free business guides for photographers and freelance creative professionals. PhotoShelter’s e-book library includes guides on email marketing, search engine optimization, starting a photography business, social media marketing, and how to sell prints. One of PhotoShelter’s other new books explains how to use “crowdfunding” sites to raise financial support for your next photography project.

PhotoShelter is a leader in portfolio websites and photo sales, marketing and archiving tools for photographers. More than 70,000 photographers worldwide use PhotoShelter to power their success online, with customizable website templates, searchable photo galleries, e-commerce capabilities, and bulletproof image storage.