In a world in which retro-look smartphone photos can be created in an instant, it’s nice to see that experimentation is continuing at the large-format, traditional end of the photography spectrum.

At the Photokina 2012 exhibition in Cologne, Germany, photographic artist Heino Heimann showed some of the 50 x 80 inch direct-exposure color prints he created using ILFOCHROME media and the room-sized Chrome Camera he built at Ilford’s headquarters in Marly, Switzerland. 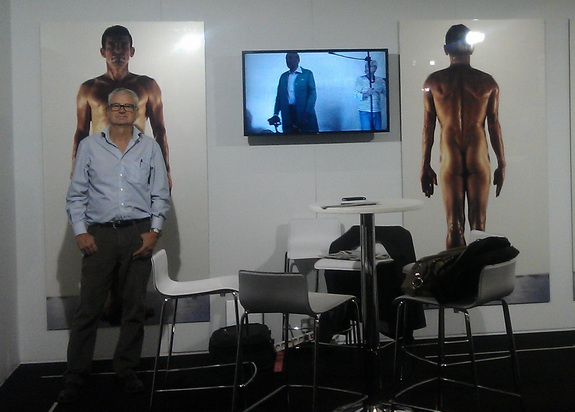 Because of the print size and quality of the materials used, each one-of-a-kind print replicates the optical powers of the human eye in terms of image sharpness and resolution. And because each print is totally unique and can’t be replicated, photographs created with the camera may have greater value in the eyes of certain buyers.

Ilford is making the Chrome Camera available to artists and photography students who want to experiment with this one-of-a-kind device and Ilfochrome, the world’s only direct-positive color media for darkroom photo printing.

How the Process Works

Here is how Heimann explained the process he used to create the prints shown at Photokina:

“First I position the subject. Then I position the lights. Sometimes I take a test shot with a digital camera first. If I do this, I have to use a grey filter to reduce the light by 3 stops. Ilfochrome has an ISO/ASA of 6, whereas normal camera sensitivity is 100 ISO/ASA.

If I’m working with a model, the model looks at the light and I hold an LED sensor close tothe eyes. I then go inside the camera and look at the wall where the image is projected and where the Ilfochrome paper will hang. I move the wall to focus the image. When it’s focused I close the camera.

I go outside of the camera and stand in front of it. I check that the model is in exactly thecorrect position using the LED sensor. This is necessary in order for the image to be perfectly sharp. After I remove the LED sensor, I open the shutter, release the flash, and close the shutter. I go inside the camera and roll the paper up, putting it inside a giant tube. I walk over to the department of Ilford Ilfochrome expert Mr. Jean-Noel Gex. We develop the paper in the darkroom for 18 minutes. Then the image is ready.”

Because the process of creating the image is so unique, the large-format print looks different from those created from enlarged digital files output on large-format inkjet printers.

“With other methods of photography, you would take the picture and then store it on a negative or on a data stick or other software. Then you would print it out. At each of these steps along the way, small changes are made to the images,” explains Heimann. “With direct exposure onto Ilfochrome, you freeze a moment in time in a precise way. With other photography methods you always get a copy, but with direct exposure you capture the moment.”

Each print is totally unique, because the subject inevitably shifts or changes during a shoot.

“Sometimes I make a series of images, such as flower shots,” Heimann says. “But after an hour, the flowers will change and wilt. Changes also happen when I’m taking multiple shots with the same model.”

Artists Are Invited to Experiment

The Chrome-Camera can be rented by international photo artists who want to explore the creative potential of the camera and make their own prints on Ilfochrome. College and university groups from Switzerland and beyond are also invited to visit the Ilford site to experiment with the Chrome-Camera and learn about the direct exposure process.

Before arranging a visit to the studio, Heimann said he would first help you determine whether or not your concept would be feasible with the camera. He will also help with preparation, technique, lighting and equipment.

Heimann is particularly interested in helping students learn about the process because he wants to encourage them to “Move away from shooting pictures and start making pictures.”

He believes the Chrome-Camera can help photography students better understand traditional photography: “It’s a totally manual process, which is very rare these days. As with slow cooking, with slow photography you have to take it step by step, be patient and you have to do everything for yourself. This is totally the opposite of the popular approach we see today with photographers encouraged to push the button and let technology do the rest. I say be the button!”

“Ilford has been enabling photographers to achieve their artistic vision for over 130 years,” says Lars Sommerhäuser, Chief Operating Officer at ILFORD. “Our Ilfochrome media is a truly unique product and we anticipate the creation of some eye-opening work when it is used to develop images from the Chrome-Camera.”

Heimann has worked as a freelance studio photographer in Germany, France, and the U.S. for a number of brands including Kodak and Minolta. His previous experience in medium and large format photography includes the Big Players billboard project with Foto Museum Frankfurt.

Contact Heino Heimann about Visiting the Chrome-Camera at Ilford in Marly, Switzerland

PHOTOGRAPHERS. ARTISTS. The latest e-book added to PhotoShelter’s online library talks about “Marketing Yourself with Photo Books.”  Although the advice was written for photographers, the e-book might also interest artists, designers, and others who could use photo books to complement other marketing efforts. 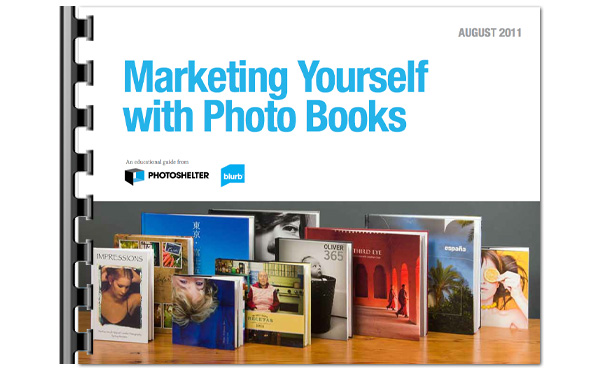 The free, 23-page e-book describes ways self-published photo books can be used to effectively build a following among prospects and expand interest from existing clients. The content covers the following topics:

Pro photographer and avid Blurb bookmaker Dan Milnor wrote the section on things to consider in making a photo book. He notes that, “Making a photo book is a great way to elevate your work.” He says that when you showcase your work in a book, it suddenly has context and presentation that goes way beyond what a promotional postcard can do. Milnor talks about some of the planning that should be done before you start, as well as some ideas for promoting your book.

Also included is a profile of Larissa Leclair, the founder of the Indie Photobook Library. The Library’s goal is to archive, preserve, and showcase self-published books and magazines.

Guidelines for submitting photo books are included on the Library’s website. Some books from the Library’s growing collection will be exhibited at the Photographic Resource Center in Boston this fall.

Although the “Marketing Yourself with Photo Books” guide was sponsored by Blurb, the e-book also discusses photography bookmaking services from other vendors. To encourage you to apply what you have learned about photo book publishing, the guide includes a 20% off coupon from Blurb.

E-Book: Marketing Yourself with Photo Books 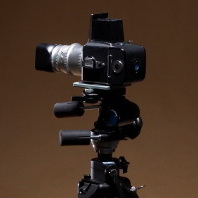 Photographers who are open to new forms of visual expression and are willing to master new technologies are likely to find plenty of new opportunities in a world in which images will be used to create more immersive, interactive and “augmented” experiences for consumers. Here are just a few of the current challenges and emerging opportunities.

Global competition.  An increased supply of images from amateur, part-time, and do-it-yourself photographers (writers, designers) has pushed down prices in all fields of photography, including stock, wedding, portraits, advertising, and editorial.

Changing need for images. The transformation from print to online publishing has changed the type and volume of photographs needed for editorial, advertising, and marketing purposes. The rise of mobile marketing and digital signage is changing this mix even further.

Ubiquitous and powerful smartphone cameras. Now that so many people are carrying high-quality camera phones, news organizations can easily obtain images from on-the-scene witnesses at news events instead of sending staff photographers. Some pro and semi-pro photographers are using their iPhone camera and apps to open up new opportunities for visual expression.

No one-size-fits-all business model for professional photography. The markets and opportunities for photographers vary from city to city and region to region.

Visual storytelling. In general, people are becoming more dependent on visual communications. We will be getting less and less information from reading printed pages and more information from smartphones and multimedia websites and publications. In addition, everyone has a story to tell. Every corporation, organization, bridal couple, and family is looking for fresh, emotionally powerful ways to tell their stories. Talented photographers who have mastered the art of visual storytelling can use those skills to create virtual tours, photo books, and mixed-media presentations that blend stills with video.

Custom décor. Consumers have learned they don’t need to use mass-produced art to decorate their homes, offices, and businesses. Digital printing has enabled more people to buy limited-edition prints or order customized prints of places or events with special meaning to them. People can afford to buy work directly from artists and photographers.

Photo merchandise.  InfoTrends predicts the market for photo merchandise will surpass $2.2 billion by 2014. As a result, many photo labs and digital-printing firms are now equipped to produce a wide range of photo-centric greeting cards, books, calendars, enlargements and photo specialty items. Most photo-merchandise items look better when the images are shot by a professional photographers.

Consulting. Now that digital cameras have replicated film-based cameras could do, researchers are developing new types of cameras with capabilities that go far beyond what was ever possible with film.  But when new technologies are developed, the engineers and researchers can’t always envision the full commercial potential of their new inventions. Experienced photography pros can help researchers better understand the many different ways new imaging technologies might be used.

Education and technical support. Millions of photography enthusiasts bought DSLRs before fully understanding how to get the most from these cameras. Now, they want professional photographers who can teach them how to get more from their cameras, guide them on location shoots, and expertly print enlargements of their best images.

New venues for art and photojournalism.  Advances in large-format printing technologies and materials have made it feasible to enlarge high-quality, high-impact images for public-service campaigns on outdoor billboards. Some photographers have created immersive exhibitions that utilize the walls, floors, ceiling, and other surfaces of indoor or outdoor spaces.

New styles of photo-based illustration and art. Photographers can easily develop their own distinctive styles and products. The range of artistic possibilities is almost endless when you consider how many different combinations exist in terms of: creative image editing; digital, historic, and mixed-media printmaking techniques; printable materials; and new methods of displaying and selling your finished images.

Corporate content marketing. Corporate marketing departments are becoming publishers. Instead of buying advertising in editorially independent magazines, many corporations are attempting to develop magazine-quality content for their websites to help establish online exposure and credibility for their brands and promote two-way communications with customers. Opportunities may develop for photography professionals who can supply both still photographs and videos.