PHOTOGRAPHERS. While many seminars at the PhotoPlus Conference in New York next week will focus on teaching photographers to shoot video on high-end DSLRs, check out some of the new accessories that will put more imaging power in the palms of iPhone users.

EyeSee360, a leader in one-shot 360 video and panoramic imaging, has announced the availability of GoPano micro, an iPhone attachment that lets everyday users create 360 panoramic videos. The company has also introduced the GoPano App and a panoramic video-sharing network.

“Panoramic video has been available to pros for years but this is the first time the technology has been made more accessible and simple to use,“ said Brad Simon, President of EyeSee360.

Using an innovative 360 lens and software, the GoPano micro offers iPhone users the ability to record everything around them simultaneously. Using the GoPano micro is as easy as snapping the two-piece case onto the iPhone along with the 360 lens. At that point you simply press record to capture the action occurring around you.

Uploading videos is just as easy. To share video experiences with friends and family, you can upload video on gopano.com or through the GoPano app. You can view the most popular videos (or your friends’ videos) right from your iPhone or by visiting gopano.com. You can also share your videos on popular social media websites.

GoPano micro is now available for the iPhone 4 and iPhone 4S. Purchase it for $79.95 through the store on the GoPano website or at B&H, Adorama or Amazon.com. It will arrive at select retail outlets later this month.

EyeSee360 was founded in 1999 as an offshoot of Carnegie Mellon University, The company has applied decades of research in robotic vision, image rendering, and software interface expertise to the challenge of creating interactive panoramic still images as well as prerecorded and live 360 panoramic video. 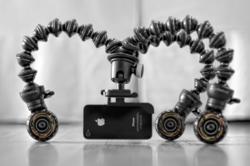 Cinetics is the Kickstarter-funded company that created the CineSkates camera dolly for shooting more fluid video on DSLRs. Now, the company has announced a CineSkates System for iPhone® 4 & iPhone 4S.

In addition, the company has launched the CineSkates Showdown–a video contest for CineSkates users. The showdown will include a category for iPhone videos.

CineSkates is a unique set of wheels that attach to a tripod and enable you to put your video camera in motion. CineSkates for DSLRs are designed to work specifically with the GorillaPod Focus™ tripod and a ballhead. New to the CineSkates System for iPhone is the Glif™ tripod mount.

If you are among those who backed the company on Kickstarter or have already bought a CineSkates system, you can enter the CineSkates Showdown Video Contest for the chance to win $500 cash or a SXSW Film Festival pass. Voting will begin on November 30, and winners will be selected based on viewer feedback on December 21, 2011. The contest will consist of 5 categories:

Cinetics was created to “to create innovatibe tools for filmmakers and photographers that combine the power to captivate with the luxury of portability.”

When the first professional-grade cameras came out that could shoot both stills and high-quality video, one of the first questions some photographers asked was “Why?” Since then, the answer is becoming clearer.

Short videos are being used to enrich the usefulness of millions of corporate and commercial websites, blogs, digital magazines, advertising, and e-books. The hybrid cameras can make it more cost-effective to add produce online video, because publishers of online content can hire a single creative professional to capture both stills and video while shooting on location, or interviewing a subject.

Here are five news items that illustrate market projections and how some creative professionals are developing new business models, products, and services to meet the demand.

According to a survey of advertising agencies conducted by the video ad network BrightRoll, “Media buyers predict online video will see the largest overall increase in spend in 2011.” The survey found that “65% of respondents plan to reallocate campaign dollars from TV to online video.” BrightRoll cited a recent eMarketer study that showed the average number of hours Americans spend online has been growing by 6% a year while the average number of hours spent watching TV has been declining 1% annually.

Although the cost of online video is still regarded as a barrier to more widespread adoption, 27% of the agencies surveyed said that more than half of their RFPs in 2010 included an online video component. 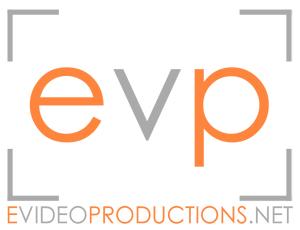 E-Video Productions in Forked River, New Jersey is offering small-business owners a “12 Months of Video” package at a low monthly fee. According to partner Darcie King, the program “allows businesses to budget for their video content without having a large up-front cost. Video content is so important in this current market, and we want to make sure it’s available to everyone.”

The plan includes the production of:

“We noticed that a lot of businesses wanted to get into doing video, but didn’t know where to start,” states E Video partner Kristopher King. “We created this plan to make it easy and affordable for anyone who wants to get in front of the YouTube generation.”

Some of the finest examples of videos shot with cameras that can capture both stills and high-resolution video will be exhibited to a live audience in a “film-fest” format on October 21 at the Goat Farm Arts Center in Atlanta, Georgia.

The evening of curated videos is part of the Atlanta Celebrates Photography festival, which seeks to nurture and support photographers, educate and engage audiences, promote diverse photography, and enrich Atlanta’s cultural scene.

In the open call for entries, the show’s curators emphasize that “We can’t accept videos shot with a dedicated video camera. We specifically want to see what the hybrid still/video camera creates, and learn how it’s being used to do more than shoot stills. In doing so, we learn about what ‘moves’ us as an audience, and as videographers, and photographers.”

They will be looking for works that are expressive, engaging, emotionally satisfying, or envelope-pushing: “We want to see your best work. It might be a low-res video shot on an old cellphone or an HD beauty shot on your brand-new 5D Mark III.”

A $250 award for “Best in Show” will be awarded by guest jurors Tom Brown, vice president of original productions for Turner Classic Movies and Michael Kochman, creative director of Turner Image Management.

Corey Weiner of Red Square Visual Arts in Boca Raton, Florida, is a former advertising account executive who began to offer photography services to architecture, design, and travel clients in 1997. Over the past two years, his services have segued into motion-picture services for a broad spectrum of projects, including fashion video look books, shows,
behind-the-scenes, and other promotional films.

Weiner says the web-based video look book is becoming a staple of fashion marketing: “From early Egyptian art to today’s haute couture magazines, fashion has always been seen as a flat, static, two-dimensional stiff image. The only time you saw a moving garment was either in person or a feature film. But think about what Audrey Hepburn did for the ‘little black dress’ and that’s the power of the moving picture.”

Recently, Red Square Visual Arts produced a two-minute film that features clothes from the new collection of Dear Earth, an organic clothing line designed by Miami-based Danielle Moore. The film features fully licensed music and a link back to Dear Earth’s website so consumers can purchase what they have seen. As the video gets picked up by fashion blogs and social networking sites, Moore and Weiner will track Facebook and Twitter comments, blog posts, and Internet traffic generated back to Dear Earth’s  e-commerce site. The entire cost of adding video production to an existing catalog shoot was $900.

“Just a few years ago, producing a video like this would have been cost-prohibitive for a small designer,” says Weiner. “And it would have cost even more to televise it to people around the world. YouTube and other online channels allow you to see exactly which point in the video is most interesting to people, and how many are clicking to purchase your product.”

Video: Dear Earth:: In the Name of Love 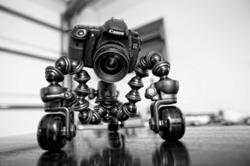 “Today’s cameras allow you to take high-resolution video in a small form factor, but the result can be shaky and distracting if you don’t have stability.” explains Cinetics founder Justin Jensen. “I wanted a camera slider that was lightweight and mobile for professional events or even spontaneous shots.”

Developed in an MIT MediaLab class, CineSkates is a unique set of wheels that attach to a tripod and enable the user to put their video in motion. They are designed to work specifically with the GorillaPod Focus™ tripod, and a ballhead, like the BallHead X, also from JOBY®.

Jensen envisions CineSkates being used for product demo videos, wedding films, music videos and other high-quality productions. He says the device enables filmmakers to produce shots that have previously been difficult to capture with bulky equipment. For example, using CineSkates with a DSLR that shoots high-res video enables videographers to produce:

CineSkates are available to preorder through Kickstarter at cinetics.com/kickstarter for a limited time, reduced price of $150 and $275 for the complete CineSkates System that includes the GorillaPod Focus and Ballhead X.