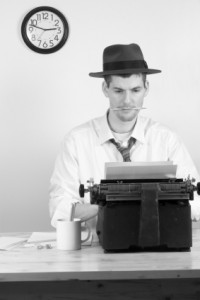 According to the 2010-11 Occupational Outlook Handbook published by the Bureau of Labor Statistics (BLS), writers and authors held about 151,700 jobs in 2008 and editors held about 129,600 jobs. About 70% of writers and authors were self-employed, while 12% of editors were self-employed. The BLS expects the number of writing jobs to grow by 22,500 from 2008 to 2018, while the number of editors is expected to decline by 400.

Below are some of the key challenges and opportunities for writers today.

Global competition for freelancing  work.The rates paid to experienced freelance writers have fallen because buyers have more choices in how content is developed. Some writing is supplied by experts seeking exposure, part-timers seeking supplementary income, workers in developing countries, or readers themselves.

Erosion of standards. Easy-to-use blogging platforms make it easy for anyone to become a writer or publisher. Without an awareness of the fact-checking and copy-editing processes that helped ensure the quality and accuracy of print publications, bloggers
sometimes violate copyrights and publish unsubtantiated gossip or speculation as
facts.

Visual communications are on the rise. People are seeking less information from reading and more from videos and multimedia.  Attention spans are getting shorter, meaning that fewer people have the time or patience to read in-depth articles or longer novels.

Immediacy and search-engine optimization matter more than style or thoroughness. The non-stop demand for fresh online content rewards less detail-conscious writers who can churn out higher volumes of content at faster speeds. Creativity is less about style, and more about how to insert the best keywords into headlines, subheads, and lead paragraphs without making the copy sound stilted.

Book publishers are accepting fewer new authors. Established writers are marketed like brands.  And whether your work is published through a traditional publisher, or you choose to publish it yourself, you still must play an active role in developing and executing the marketing plan.

Multimedia Articles. Writers who can submit photographs, slideshows, and videos to accompany their articles will help make life easier for publishing companies that produce both print and online versions of their magazines. The demand for multimedia content
is likely to increase as the iPad, tablet computers, and e-readers become more
prevalent.

Corporate Blogging. Corporate marketing departments are becoming publishers. Instead of buying advertising in editorially independent magazines, corporations are using “content marketing” to help establish online exposure and credibility for their brands and promote two-way communications with customers. There’s so much noise from so many
different companies that some corporations are starting to recognize the need for
quality content that can help set them apart.

Independent Blogging. Editorially independent bloggers are becoming more influential, because readers sometimes need and want broader coverage of a certain topic than a corporate marketing department might want to provide in their own blogs. Corporate marketing managers have different objectives than professional journalists and
editors.

Self-Publishing. It’s becoming increasingly affordable for writers to publish and promote their own e-books and small quantities of printed books and magazines. Some self-published writers who built a following for their work later signed contracts with major publishing companies.

The Gig Economy.  Freelancing is becoming the new norm. A Business Week cover story noted that rather than hire full-time employees, many companies are assembling “virtual teams” of employees on a project-by-project basis.  Former Vanity Fair editor Tina Brown (now of The Daily Beast) coined the term “The Gig Economy” to describe the growing trend. She observed that former staff journalists are now earning a decent
living by juggling a collection of free-floating projects, consultancies, and part-time assignments. Although full-time writing jobs are still concentrated in New York, Chicago, Los Angeles, Boston, and Washington, DC, advances in communications technology have made it easier for freelance writers to work anywhere they choose.

Constant demand for fresh content. Now that consumers stay constantly connected to the Internet via their smartphones, they are expecting a constant stream of fresh content, whether it’s for educational or entertainment purposes.