If you will be traveling near the South Rim of the Grand Canyon this summer, stop by the National Geographic Visitor Center and be photographed with the 3D pavement print created by Kurt Wenner.

Entitled “Grand Canyon Illusion,” the piece is a visual mind and eye puzzle that conveys the vastness of the canyon. Visitors are encouraged to “complete the art” by stepping into it and being photographed. In the photo, you will appear to be perched on an outcrop high above the Canyon floor. 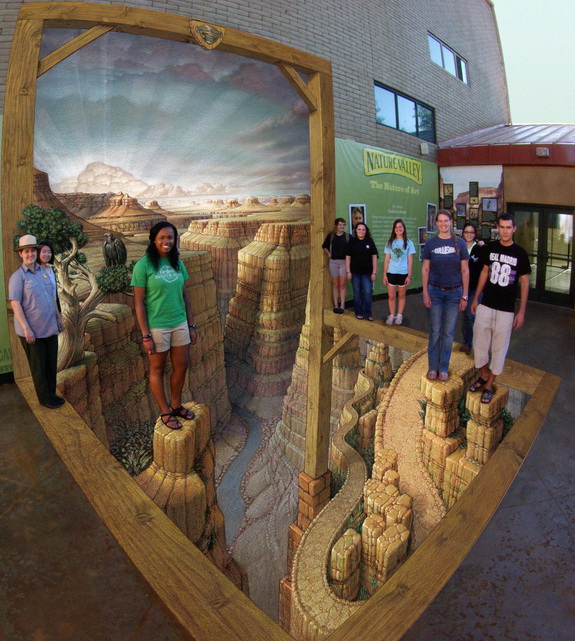 “It’s a sunrise idea –the colors need to be at the surface of the illusion,” said artist Kurt Wenner. “The thousands of different colors make it so momentous.” Within a 15-foot span, the transitions in the art provide a journey for the eye, one that is as smooth as possible. As he puts it, “You’re trying to reach to infinity.”

It is the first Kurt Wenner permanent 3D illusion composition to be exhibited in North America.

Wenner’s large-scale drawing process involves a form of perspective known as anamorphism, a technique that several great artists first used during the Renaissance to develop illusion in art. These artists used the technique to depict soaring architecture, floating figures, and dreamscapes on massively large ceiling frescoes.

By combining elements of this classic Renaissance art with traditional street painting techniques, Wenner gave birth to a new art form called anamorphic or 3D pavement art. Audiences can not only ‘view’ Wenner’s art, but also ‘interact’ with compositions that appear to rise from the ground or fall into it.

“We are delighted to have visitors from all around the world interacting in and learning from Kurt Wenner’s 3D Grand Canyon Illusion here in our courtyard,” said Janet Rosener, Director of the National Geographic Visitor Center. “Through the magic of Wenner’s fine art, we aim to give our visitors a higher level of understanding and appreciation for this special place and to help them get the most out of their vacation at the Grand Canyon.”Nature Valley® is the presenting sponsor of Kurt Wenner’s Grand Canyon 3D artwork.

“Kurt first came to our attention through a National Geographic documentary, Masterpieces in Chalk, filmed in 1987,” said Robert S. Perkins, Chief Executive Officer of Destination Cinema, the National Geographic Visitor Center’s parent company. “We would like to suggest that, when visitors come to experience the Grand Canyon, they should take the opportunity to see the artwork of Kurt Wenner, a man many consider a natural wonder of the art world.”