In “The Future 100 Report: Trends and Change to Watch in 2015,” JWT analysts predicted that creatives would collaborate in designing “Experiential Public Spaces” that would use new multi-sensory experiences to augment nature and public spaces.

On company at the forefront of this trend is Chaotic Moon Studios, a creative technology studio in Austin, TX. They are partnering with the Austin branch of the global architecture and design firm Gensler to consider how technology could be used to create new types of parks.

Their first initiative will be an “Orchard” of 30 ft. interactive trees designed to enchant and delight visitors and bring new life to an urban environment.

Orchard will include 30 pneumatic structures standing three-stories tall. Each structure inflates to form the abstract shape of a tree. This form is anchored by a steel pole running up the center of the “trunk”. 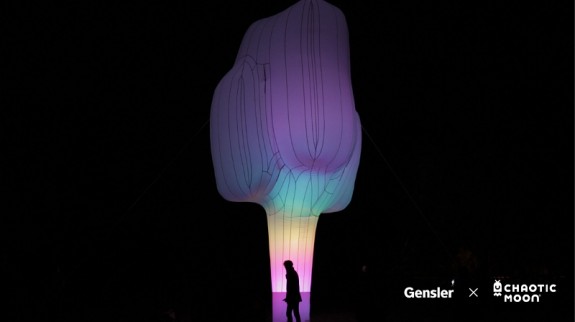 “We intend to create a pop-up icon that will transform any place into a destination,” said Gensler’s John Houser. People who touch any tree will experience a harmonious kaleidoscope of light, sound, and color as the Orchard blossoms into an homage to technology and nature. 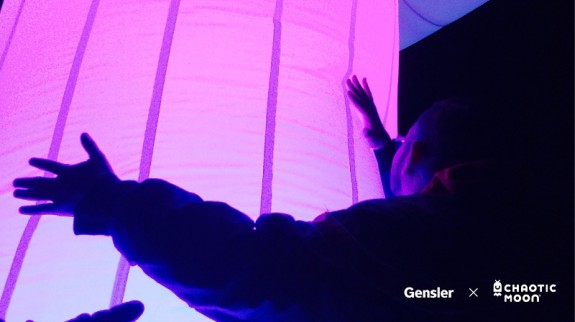 A prototype of the first tree was unveiled during the South by Southwest (SXSW) festival in Austin.

Chaotic Moon describes their studio as “a group of thinkers, builders, designers, developers, leaders, dreamers, and doers hell-bent on changing the world through better digital experiences.” Forrester Research mentioned Chaotic Moon as an example of the fact that “The lines between creative developer and technologist are not neatly drawn.”

The founders of Creative Moon agree that “traditional shops are a thing of the past.”  According to CEO and co-founder Ben Lamm, Chaotic Moon is based in Austin because they believe in the city’s potential: “The fact that every leading name in tech has built an outpost here is a testament to that.”

Gensler is a global design firm that partners with clients to create more livable cities, smarter workplaces and more engaging leisure destinations. Last year, Gensler worked with 2,390 client in 114 countries. Gensler is headquartered in San Francisco and has office in 30 U.S. cities and 16 offices in Europe, the Middle East, Africa, Asia, and Latin America. Their clients include 40 of the 50 top-ranked Fortune 500 companies, 8 of the top 10 retailers in the U.S., and 9 of Interbrand’s 10 best global brands.