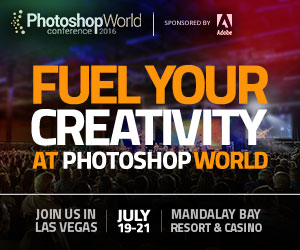 Each year creative people from all walks of life come together for three days in Las Vegas. Their mission is to leave the world behind and totally immerse themselves in a Photoshop, design, and photography love fest called Photoshop World. This year’s event runs July 19-21, 2016 at the Mandalay Bay Convention Center.

The conference is sponsored by Adobe Systems and produced by the KelbyOne online education community.

The conference includes more than 80 sessions presented by an extraordinary roster of talented instructors.

Because creative people learn best when they’re having fun, the conference also includes loads of networking events, parties, after-hour sessions, meet-ups, and get-togethers. The conference kicks off with a high-energy opening keynote by people at Adobe who have made Photoshop World

“Photoshop World isn’t just another conference. There’s a very special vibe to it, an energy that recharges and renews your creative spirit,” said conference technical chair Scott Kelby. “People come here year after year to lose themselves in all this cool stuff and Photoshop is at the heart of it. No matter what you do, whether it’s video, photography, design, or blogging, this tool has changed our world.”

He says the goal has always been for participants to come away learning more in these three days than they have in the last three years and it’s what’s powers the conference from start to finish. It’s the ‘secret sauce’ that has made Photoshop World a must-attend event for the creative community for 19 years straight.

DESIGNERS. Stratasys Ltd. is taking color 3D printing to a new level of realism and accessibility with the release of Stratasys Creative Colors Software, powered by the Adobe 3D Color Print Engine.

Available for use with Stratasys’ Objet Connex3 3D Printing solutions, the Creative Colors Software combines advanced color management with a direct design-to-3D print workflow. Stratasys and Adobe are both working to make 3D printing easier to use while increasing creativity. 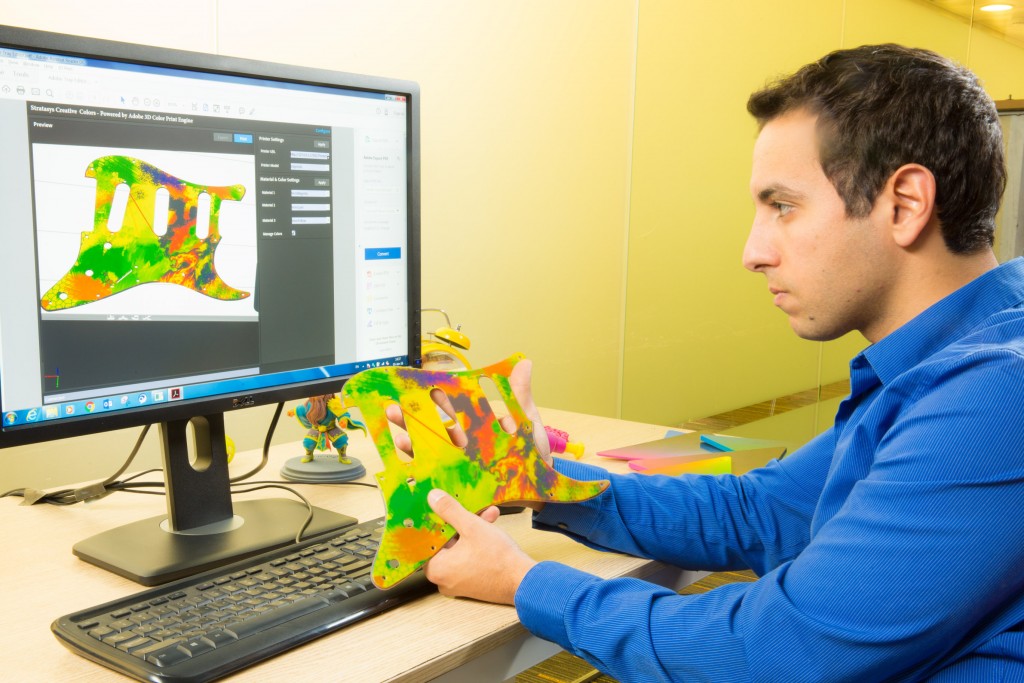 Because Objet Connex 3 printers can combine a range of materials in every print job, designers can use the printers to make realistic prototypes that don’t require extra assembly and post-processing. 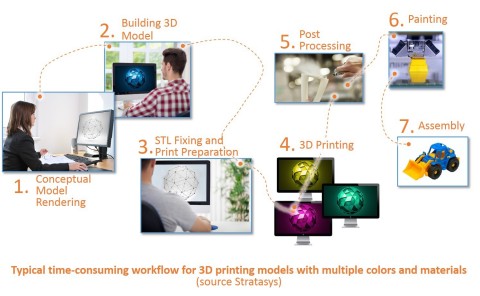 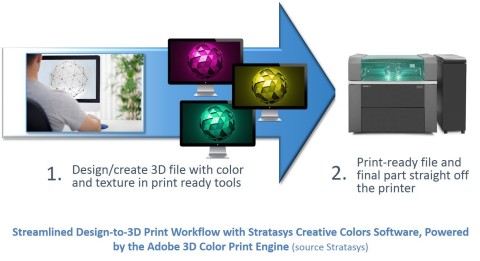 By incorporating multiple gradient colors, patterns, and textures, a model produced on the Objet Connex3 can have the same look and feel as the final intended product, vastly reducing product development times while increasing product quality.

One company that has tried the Stratasys Creative Colors software is Saflio, a world leader in high-end and luxury eyewear.

“Safilo has recently improved its prototype development process thanks to the adoption of Stratasys Creative Colors Software,” said Vladimiro Baldin, Chief Product Design and Creation Officer at Safilo. “The ability to print prototypes with the same color and texture as the finished product, has significantly increased our speed in developing new eyeglass frames. Now, we can push the creative boundaries even further, quickly responding to market trends and reducing our prototyping cycle from three days to just three hours.”

Features such as direct quoting, validation and previewing can help ensure that the printed design won’t exceed your budget.

Stratasys Creative Colors is now bundled with all new Objet Connex3 3D Printers and can also be purchased for existing Objet Connex3 systems.

DESIGNERS. Last year, Adobe introduced new features in Photoshop CC to help simplify 3D compositing and printing. This year, Adobe is continuing to help you unlock the power of 3D printing by closing the gap between power and usability.

Adobe has added some important new 3D printing capabilities in their 2015 release of Creative Cloud and acquired Mixamo, a San Francisco-based company that enables you to create and customize 3D characters and animations.

In a blog post announcing the Mixamo acquisition, Adobe VP Winston Hendrickson noted that “3D tools have come a long way in the past few years, but are still generally inaccessible to most designers due to the great expense and extensive training required to learn the complicated techniques. However, using 3D in 2D workflows adds flexibility to the design work you’re already doing and delivers better output options for interactive websites, game content, video, and 3D printing. Our research tells us that one of the most in-demand skills for designers is 3D, but using it is just too hard with the current tools and technology.”

Support for PDF and SVX Formats 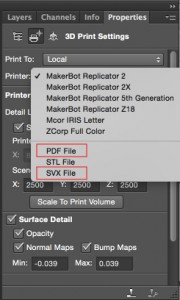 The latest release of Photoshop CC enables users, 3D printer manufacturers, and 3D printing service providers to use the ISO-standard 3D PDF file format to enable 3D printing job submissions and workflows. This can streamline processes and reduce costs, because the files are automatically checked and repaired prior to creating the 3D PDF file.

Another new feature in the latest release of Photoshop CC is support for 3D printing through the 3D Hubs service. This enables Photoshop CC users to submit print jobs to local 3D-printing service providers who are members of the 3D Hubs worldwide network.

Currently more than 19,000 owners of 3D printers worldwide are part of the 3D Hubs service. Each listing for a 3D-printing service tells what type of equipment the service has, what types of materials they offer, and how quickly they can turn around the job. One of the goals of 3D Hubs is to accelerate a future of local and on-demand production. According to the company, the 3D Hubs network provides over one billion people access to a 3D printer within 10 miles of their home.

The Tinkerine Ditto Pro is a prosumer-grade 3D printer that fits nicely in a classroom or design studio. Its elegant, open-C frame design makes it possible to build products that are taller and deeper than other 3D printers.

According to Eugene Suyu, president and CEO of Tinkerine Studios, “The prosumer market is demanding a 3D printer that features quiet operation along with high speed, high resolution, and massive build volume.”

Designers who want to print their work on a Tinkerine Ditto Pro can now download and install a printer profile from Photoshop CC. The installed profile will enable you to send a file directly from Photoshop CC.

“The integration of Tinkerine support within Photoshop CC makes it even easier for customers to access top-of-the-line 3D printers and training resources that will enable them to create compelling 3D objects,” said Maria Yap, Adobe senior director of production management, Photoshop.

Adobe believes the Mixamo acquisition will give creatives a platform for more 3D innovation in the future. Integrating Mixamo’s technology into Photoshop will let you create, customize, manipulate, rig and animate 3D content, as well as take advantage of stock characters that can be easily pulled into projects.

As Hendrickson explains in this blog post, designers will be able to generate more realistic scenes in lighting, reflections, and shadows.

“Designers are increasingly being asked to create photorealistic scenes that don’t exist in the real world,” said Hendrickson. “And while this is already being done in Photoshop CC today, we can push the envelope further to enable a level of precision like never before and to make it easier for everyone to use.”

Blog Post: Unlocking the Power of 3D for the Creative Community

In keeping with their mission of “changing the world through digital experiences,” Adobe has launched a milestone release of its flagship Adobe Creative Cloud tools and services. They also announced the availability of the new Adobe Stock content service.

Adobe Stock is the first stock content service to be integrated directly into the tools creatives use every day.

Adobe Stock makes 40 million photos, vector graphics and illustrations accessible directly within CC desktop apps.  You can launch Adobe Stock with CC desktop software, add watermarked images to Creative Cloud libraries, and then access and work with images across multiple desktop and mobile tools. When ready to license an image for finished work, you can do it directly within the CC desktop software application. You can also edit a watermarked image in an applications such as Photoshop CC. When licensed, the edits are automatically applied to the purchased full-resolution image.

Based on the acquisition of stock content provider Fotolia earlier this year, Adobe Stock is available in 36 countries and 13 languages worldwide, including the US, UK, Australia and Japan. It is expected to be available in India in the near future.

Because Adobe Stock is a standalone service, you don’t have to be a Creative Cloud member to download, purchase, or sell stock images. You can buy single images as needed or purchase a monthly plan.

“Our customers–the best photographers and designers on the planet–will have the opportunity to contribute millions of new photos and images to Adobe Stock,” says Wadhwani. “This is really going to raise the bar in the world of stock content.”

Wadhwani believes Creative Cloud 2015 is Adobe’s most powerful and comprehensive release to date.

In addition to these updates, Adobe debuted Adobe Hue CC. Hue CC provides an easy way to capture and share production- quality lighting and color schemes — for video, film and broadcast — by using an iPhone camera and then applying these light and color moods into a Premiere Pro CC or After Effects CC project.

With CreativeSync, assets are instantly available, in the right format, wherever designers need them — across desktop, web and mobile apps. Available exclusively in Creative Cloud, CreativeSync means work can be kicked-off in any connected Creative Cloud mobile app or CC desktop tool; picked up again later in another; and finished in the designer’s favorite CC desktop software.

With the 2015 release of Creative Cloud, Adobe magic and Mercury performance provide speed and technology breakthroughs across 15 CC desktop applications:

Lightroom CC: Photoshop CC and Lightroom CC both gain the new Dehaze feature, which appeared first in October 2014. Dehaze eliminates fog and haze from photos, including underwater shots, for startlingly clear images. Haze can also be added to a photo for artistic effect.

After Effects CC: A new Uninterrupted Preview allows artists to adjust the properties of a  composition and resize panels without impacting playback. Also, the ground-breaking Adobe Character Animator brings 2D figures to life using a webcam to track facial movements, record dialog and apply movements in real time onto a pre-configured character.

Illustrator CC is now 10 times faster and 10 times more precise than CS6. Powered by dramatic boosts to its Mercury Performance Engine, users can now pan and zoom smoothly without delays. With the new Chart tool (preview), designers can create beautiful custom charts and share them with others via CC Libraries.

InDesign CC gets its own Mercury performance surge. Zooming, scrolling, and paging through complex documents is now twice as fast. InDesign now also allows users to publish and distribute documents with a single click.

Adobe Muse now includes instant access to premium fonts from TypekitAdditional updates to these and other CC desktop applications make this one of Adobe’s biggest releases in years.

Creative Cloud for the Digital Transformation of Enterprises

These enhancements are designed to help large commercial, education and government customers who want to speed the development and publishing of customer experiences, as part of their digital transformation strategies.

A public beta of this major update to DPS is available this week, with more information available here. Content from Creative Cloud for enterprise also syncs with Adobe Experience Manager (AEM), a key component of Adobe Marketing cloud, to accelerate marketing campaigns by streamlining creative-to-marketing workflows.

More Details About the 2015 Release of Creative Cloud